For the second straight year, Late Night in the Phog will be held during prime time. If it's anything like last year's season-opening hoopsfest, it'll be a resounding success.

A near-capacity throng of 15,750 fans - spectators started lining up at 8 a.m. - squeezed into Allen Fieldhouse for the 21st-annual Late Night, the first one held prior to midnight.

"Awesome," KU coach Bill Self said of the atmosphere in the storied building, which was enhanced by a new center videoboard that had the fans rocking while watching replays of Rodrick Stewart's vicious slams in a pre-scrimmage dunk drill.

The Jayhawks did hold their annual dunk drill, where Stewart put on an amazing performance when he put the ball between his legs before slamming it home. Julian Wright had a strong slam off the board, while C.J. Giles also had some rim-rattlers.

Here's a look at the previous Late Nights: 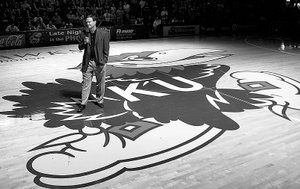 KU coach Bill self addresses the Late Night crowd from the center-court Jayhawk.

Hypnotist Tom Silver, who performed along with Dallas Mavericks' mascot Mavs Man, didn't need the power of suggestion to convince KU's fans to have a good time.

KU's six freshmen started things on a high note, holding a "dance off" inspired by the movie, "You Got Served." Robinson started the dance competition, gyrating for 15 seconds, followed by solos from C.J. Giles, Darnell Jackson, Matt Kleinmann and Alex Galindo, who has since transferred to Florida International.

In a spoof of the show "Behind the Music," three members of the Temptations -- Nick Bahe (now at Creighton), Jeremy Case and J.R. Giddens (now at New Mexico) pulled females from the stands to serenade them to the tune, "My Girl."

The Jayhawk players took part in what has become a traditional skit-ending circle dance to the songs "Step in the Name of Love," and "Drop It Like it's hot."

"I thought the crowd was great," KU coach Bill Self said. "To fill the building on fall break shows the kind of support we get from our students and all our fans. The skits were actually decent," he grinned.

The first Late Night of the Self era was full of laughs, as usual, but also some dramatic moments. 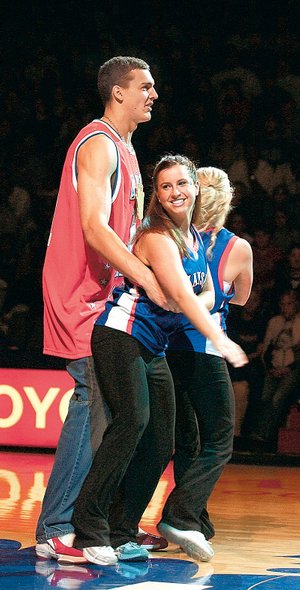 One came when Self was introduced to a packed house after a showing of a highlight video of the coach's introductory press conference.

Self was accorded a prolonged standing ovation.

"I have been in some loud places," Self said, "but that was a little bit overwhelming."

The fans also rocked the building when the 1988 title team, led by coach Larry Brown, was introduced.

Brown skipped an NBA exhibition game to attend the proceedings.

The fans responded with loud ovations for all of the '88 players and coaches, the biggest rounds of applause reserved for New York Knicks coach Brown (then with the Pistons) and national-player-of-the-year Danny Manning.

Asked his most memorable moment of his first Late Night, Self said, "I'd say when they showed the video. And the 'One Shining Moment' video of the '88 team."

"It was the most fun I had in my four years," said Collison, now a member of Seattle's SuperSonics.

Then KU coach Roy Williams had a lot of fun, too, praising administrators for installing a new sound system, which improved acoustics in the fieldhouse.

Freshmen Simien, Lee, Langford, Miles, and Hawkins serenaded their mothers in a song and dance. Williams wasn't thrilled with the singing, however, bemoaning the fact the songs were barely audible.

"It took away a great deal of enjoyment for me. We've got to figure a way for it to be heard, or maybe 14 Late Nights is enough," Williams fumed after the proceedings.

Late Night had a patriotic theme coming a month after the horrific events of Sept. 11, 2001.

Then-KU athletic director Al Bohl honored KU students for raising money for victims of the tragedy on the East Coast. And country singer Coley McCabe performed a stirring rendition of the National Anthem.

Also, Jeff Carey yelled the words "God Bless America" as a red, white and blue ribbon dropped from the rafters near the retired jerseys in the south rafters. The emblem remained in the fieldhouse all season.

Drew Gooden, who is now with the Cleveland Cavaliers, sat in a canoe with John Crider, who ultimately transferred from KU to Washburn, as the canoe was pulley-ed across the fieldhouse floor.

"We were running away from some sharks or something," Gooden said, relishing the moment. "The shark was a guy with a fin on a skateboard. They have us do some crazy stuff. We're forced to do all that."

Carey, who showed with a wavy head of hair instead of his customary crewcut, had teammates shave his head under the South goal. The clipping of his hair took longer than expected, the crowd growing a bit restless waiting for the trim to be completed.

Big men Eric Chenowith and Carey played electric guitar as Collison sang vocals for the Limp Bizkit song, "Faith." They were joined by a drummer in the KU band.

The theme was "Night at the Naismiths" - an awards show in which guest judges rated acts and presented not an Oscar, but a "Naismith'' to the winners. Ever-athletic Kenny Gregory rammed home several windmill dunks during a warmup drill.

A transfer from LSU, Lester Earl wore a black leather jacket in a spoof of 1950s music. Earl had some monster jams, along with Gregory and Paul Pierce in a pre-scrimmage dunkathon. Also, Ryan Robertson had a big role in a skit as host of the game show, "The Price Is Right." Also, Raef LaFrentz imitated John Travolta in a dance skit, C.B. McGrath mimicked talk-show host David Letterman and Earl danced wildly in several numbers.

"Revlon Vixen" was the eccentric player's color of choice.

That's the night Pollard, who is now with the Indiana Pacers, proposed to his girlfriend, Mindy Camp. She, of course, accepted.

Fans showed early for the Saturday night event which started when former KU football coach Glen Mason took the court and yelled, "Live from Allen Fieldhouse, it's Late Night With Roy Williams." Now veteran football coach at the University of Minnesota, Mason has said one of his favorite moments at KU involved the reception he received at that Late Night. Earlier that day KU had won a football game during a 10-2 season.

Baseball Hall of Famer George Brett and golfing great Tom Watson joined ex-Royals' center fielder Brian McRae and ex-Chief defensive back Deron Cherry as honorary coaches. Brett wore a KU T-shirt under his button-down, while Watson wore a KU hat throughout the proceedings. Brett took his coaching duties most seriously, getting in the face of KU's Jerod Haase for forgetting to high-five him during introductions. The coaches stuck it out the entire evening, well past 1 a.m., Williams applauding them for their participation.

Fans dressed as their favorite TV sitcom characters before the scrimmage. The Lone Ranger, Silver, Tonto, Gilligan's Ginger and Granny Clampett all were on hand. This Late Night marked the debut of freshmen Jacque Vaughn, Pollard, B.J. Williams and Nick Proud, as well as Cal transfer Jerod Haase.

Zany big man Greg Ostertag, who is now back with the Utah Jazz after a season in Sacramento, showed up in a Frankenstein's monster outfit. Williams' entrance was followed by a ribbon-cutting ceremony for the new fieldhouse floor. The place was packed, even though Late Night was televised. The TV show actually drew poor reviews. The 8 to 9 p.m. portion of this year's Late Night will be shown on ESPNU.

Williams decided Late Night would be better suited on a Friday night, not Monday, the first day KU could practice in accordance with NCAA rules. Pre-scrimmage hoopla was highlighted by freshman center Ostertag, who lip-synched a Garth Brooks tune while surrounded by the Crimson Girls. Ostertag's country singing and dancing became a staple at Late Night's during his career.

More than 13,000 fans showed to see the Jayhawks dance and scrimmage after a long Sunday of pro football, including a Chiefs' home game against Detroit. During the 1990 scrimmage, Rex Walters scored 16 points and amazed the crowd with some violent dunks. Walters is now associate head coach at Florida Atlantic, working for former KU aide, Matt Doherty.

In '89, a $5 admission fee was charged to pay for two bands, who performed on a massive sound stage. Maddox, Rick Calloway, Freeman West and Jeff Gueldner stole the show performing Robert Palmer songs.

"I think Jeff Gueldner better stick to basketball," Williams said at the time.

Williams' first Late Night - it was called "Later With Roy Williams" - drew over 10,000 fans. Alonzo Jamison shattered the backboard. After the new goal was in place, Milt Newton led the Blue team to a 36-35 victory as he scored 16 points.

Manning and Scooter Barry sang The Temptations' song: "My Girl." The normally reserved Manning was willing to grab center stage prior to his senior season. He went on to lead the Jayhawks to the national championship, KU's last NCAA crown.

"It was fabulous. I was thrilled with the students," Brown said of the throng that showed at 12:01 on a Tuesday morning. "They made it all worthwhile and I know our kids enjoyed it."

Many of the students wore T-shirts that read, "Late Night With Larry Brown. Starring the 1985-86 Kansas basketball team : all the way to Dallas."

The shirts proved prophetic as the team advanced to the Final Four in Dallas. Current KU coach Self was a grad assistant on that team.

Where's the breakdown for '05?

Hey! Newsflash...Rex Walters is now head coach at FAU while Doherty went to ...SMU, I think.