What do you think the NCAA penalties will mean for KU football and basketball?

It is now on the record that sometime in Al Bohl's 20-month tenure as Kansas University's athletic director, compliance officer Janelle Martin approached Bohl about the need to budget more help for her understaffed office.

"Compliance," Bohl is said to have responded, "doesn't sell tickets."

That belief, in part, indirectly brought Kansas to Thursday's news, when the NCAA Committee on Infractions passed out punishment for violations committed within the athletic department between 2000 and 2005.

A lack of institutional control allegation - brought forward partially by severe compliance shortcomings during Bohl's tenure - was justified in the eyes of the committee. A three-year probation was handed down as a result, keeping Kansas on a short leash until Oct. 11, 2009.

KU Chancellor Robert Hemenway was asked specifically about Bohl's comment cited in the committee's report - one which seems to reflect an attitude that likely gets schools in the very trouble Kansas finds itself in. 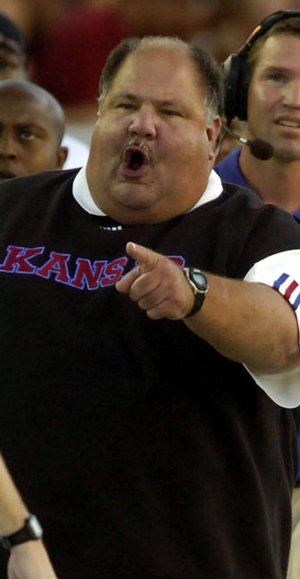 "He never said that to me," Hemenway responded. "I think you can just about imagine what would have happened had he ever had."

In addition to the probation, more penalties were passed out for KU's football and men's basketball programs, which were cited as being in violation of multiple NCAA rules. Among the new punishments:

¢ Men's basketball also must restrict the number of official campus visits by eight over a two-year period. Given 12 per year, coach Bill Self now has 16 visits to use instead of 24 between now and the 2008-09 school year.

¢ For being found guilty of academic fraud and other violations, football loses three scholarships per signing class for each of the next two years. The 25-scholarship maximum for most football programs is just 22 for Kansas until 2009.

Women's basketball, meanwhile, received no punishments beyond what was self-imposed 16 months ago, and the committee actually found the previous penalties of scholarship loss and recruiting restrictions to be too harsh, saying they were "disproportionate" to the infractions.

Hemenway said KU would not appeal the new penalties.

The relief for Kansas overall is that no postseason bans were passed out in any sport, meaning KU's football team will be eligible to play in a bowl game, and the basketball teams are eligible for postseason tournaments if they qualify.

"That : is the kind of penalty that would come up with some pretty significant facts," Committee on Infractions chairman Gene Marsh said of a postseason ban, "and that just really wasn't in the mix here, honestly."

Mangino and Self had similar opinions on the new punishments passed to their programs: serious, but not back-breaking.

"Even though the reduction of scholarships is a serious matter," Mangino said, "it's not a fatal matter."

Thursday's news finally puts to rest KU's compliance troubles. The news was first made public in July 2005 when Kansas announced self-imposed penalties for violations unearthed internally. The NCAA took over the case, and its findings - which weren't much more than what KU documented - were made public in April.

In August, Kansas officials made their case to the Committee on Infractions at a Baltimore hotel, and the final step of the process came down Thursday with the committee's 31-page response.

"We discovered we had a problem; we fixed the problem," Hemenway said, "and we are ready to move forward with a much stronger compliance program."

When Bohl - who could not be reached for comment - made the reported statement about compliance before his 2003 firing, Janelle Martin was the lone compliance officer, and she split time between that and being senior woman administrator.

Since then, Kansas has boosted its compliance staff to five full-time employees under the direction of Perkins.

The committee noticed the change, and Marsh even addressed it without solicitation.

"The current director of athletics should be recognized for his good and effective work since he came on in the summer of 2003," Marsh said. "In our view, he's made all the right moves since taking the job and has helped the school a great deal in its compliance effort."

yea its a good thing our best players are young!

So much for the people telling us that the journal world was doing such a terrible job covering the story. The punishments handed down were no more serious than the newspaper was predicting. No postseason bans were handed down, just a few scholarships lost. Yes the allegation of Lack of institutional control was a serious one, but you couldn't pin that label on any one of the programs. It was a case of having minor violations in several departments and each of those departments only required a punishment severe enough to fit their crime. The fact that the root of the problems at KU were fixed before the meeting even took place, and the fact that in all likelyhood none of these violations would have ever been known about by the NCAA if KU had not self-reported them helped us to avoid any more drastic punishments.

Our athletic director gets alot of heat for how much KU is paying him, but he has proven to me that he is well worth it. He took the initiative to investigate his own school and handle any problems that have happened not only during his tenure, but in the tenure of the AD before him as well. The NCAA's rules are a bit extreme for my taste, but the classy move is to make sure that your university follows the rules as closely as possible whether you agree with them or not. KU took a big step up when they hired Lew and I appreciate being able to cheer for an athletic program that is as classy as any in the nation.

All I can say is thank god Self has recruited fabulously the last few years, because the reduction in scholarships will be nothing more than a scarlet letter. It will hurt, it will be embarrassing, but life will go on.