He'd venture into an empty Allen Fieldhouse and soak up the atmosphere before heading home in the wee hours of the morning.

"We used to joke all the time. If you went in there at night and listened closely you could hear the ghost of Phog Allen. All that crazy stuff," said Hill, who worked six seasons on the staff of Ted Owens and two years for Larry Brown.

He will return to the fieldhouse - this time as a head coach - on Sunday when his Seattle SuperSonics meet the Chicago Bulls in an NBA exhibition game, set for a 1 p.m. tip.

"It'll be exciting personally to be back in Allen Fieldhouse, hopefully see old friends or shake hands," said Hill, indicating he hoped to spend some quality time with former KU announcer Max Falkenstien.

Hill has many fond memories of a stint at KU (1977-84) in which he coached Darnell Valentine, Danny Manning, Tony Guy, David Magley, Carl Henry, Calvin Thompson and Greg Dreiling.

"I've told people over the years once you get the opportunity to coach at Kansas, it doesn't get much better than that because of the tradition and the fans," Hill said.

"I'd say as fans go, they know basketball and love it. I remember when I first got there we played an early-season game against Murray State, and it was snowing like crazy. We played a team we were going to kill - during the week - and the place was full. I'll never forget that." 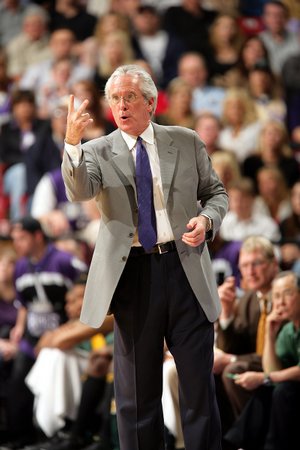 Supersonics coach Bob Hill, a former Kansas University assistant, will return to Allen Fieldhouse for Sunday's exhibition against the Chicago Bulls. Tipoff will be 1 p.m.

Hill - he coached as an assistant two years at Pitt before being hired by Owens at KU - was kept on by Owens' replacement, Hall of Fame coach Brown.

Hill finally left the KU nest to join the staff of the New York Knicks prior to KU's 1984-85 Final Four season.

"Part of my desire to go to the NBA was I was in college basketball 14 years, and I wanted something different," Hill said. "I'll never forget I'd been an assistant for nine years and I was working for Ted. I walked in his office one day and said, 'I feel I'm leveling out. I'm getting stale.'

"I went and spent a week with George Raveling at Washington State. George was a good fix for me. I'd gotten stale and wanted something different."

He stuck around KU for two more years, helping Brown with the transition, then elected to join Hubie Brown's Knicks staff.

"I'd worked Hubie's camp the previous two summers. He had an opening, and I got the job," Hill said.

"It wasn't easy leaving Lawrence. I remember we had a huge party at Becerros (restaurant). His (Becerros owner's) wife was an artist. She drew a picture of campus and everybody on the team signed it. Obviously we still have it," Hill added, referring to he and wife, Pam.

He directed the Spurs to a 121-43 record, won two division titles and guided his team to the Western Conference finals in 1995.

Yet he was fired by general manager Gregg Popovich, who took over as head coach.

"It was a tough one to swallow. We were doing a good job. He just wanted to be the coach," Hill said of Popovich, who was able to land Tim Duncan in the ensuing draft and since won a couple of championships.

Hill briefly returned to college, compiling a 36-78 record as head coach at Fordham University from 1999 to 2002.

"I made a mistake. I hated every second of it," Hill said of the Fordham experience. "Recruiting had changed enormously. The school was financially embarrassed. It was my fault. They gave me a 10-year contract, and the salary was good. I shouldn't have taken it."

After leaving Fordham, Hill organized camps and traveled to Asia for basketball clinics. He joined the Sonics staff in August of 2005 and took over as head coach when Bob Weiss was fired last January.

The Sonics went 22-30 under Hill, who hopes to direct his team to a playoff berth this season.

He's unsure how his playoff contender will fare in the meaningless exhibition Sunday.

"With Nick and Kirk it should be a lot of fun," he said of the Sonics' Nick Collison and Bulls' Kirk Hinrich, both former teammates at KU who are returning to their college home as professionals. "Being an early game, it is liable to be sloppy."

"I'll start him," Hill said. "Nick Collison is a great great kid, a consummate pro. He's a terrific team defender. His last piece to the puzzle is to settle down and to start making some shots.

"He has had his moments. He had a double double - 20 and 10 - against Boston. I think he's going to be a terrific player. No doubt he will establish himself in the NBA."

"He's tried to bring a style of play fit for us, up-tempo. We do a lot of things coach (Roy) Williams did," Collison said. "Run the primary break, if not secondary break. He wants to get more guys involved in the offense than just Ray (Allen) and Rashard (Lewis). I think we'll have a good season with coach Hill having the team the entire season."

Tickets remain. They are available at kuathletics.com and the KU ticket office.