AUSTIN, TEX. — So what's it going to be Mack Brown? A streak or a fluke?

Was that 45-12 victory over Oklahoma with the swaggering Vince Young at quarterback the start of a winning streak over your big rival?

Or was it a once-every-six-years result that Adrian Peterson and the Sooners will squash this weekend?

The Texas coach said this week he was glad the spotlight on the game no longer was focused on him and the five-game losing streak to the Sooners. But a loss and a return to the bitter days of 2000-2004 would have Texas fans gnashing their teeth again.

You can just hear the critics now: Sure he could win with Vince, but ...

There won't be any escaping it until you beat Oklahoma with Colt McCoy, the steady West Texas yin to Young's freewheeling, hypertalented yang.

Last season was a glorious ride to the national championship, something that hadn't happened in 36 years. The Sooners are on the schedule every October.

That means Longhorns fans want to win this game and party at the State Fair of Texas every year, not listen to Boomer Sooner ringing in their ears.

Brown is 87-20 at Texas. He regularly beats the heck out of every other Big 12 team and hasn't lost to the Longhorns' other big rival, Texas A&M, since 1999.

It was that losing streak against the Sooners, more than any bowl game loss or random defeat at Stanford, that raised the questions of could he win the big one. 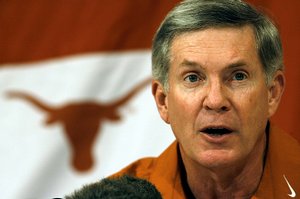 Texas coach Mack Brown meets the press in this file photo from Aug. 6. UT will play Oklahoma in the Red River Rivalry on Saturday in Dallas.

And lest anyone need reminding, he won THE BIG ONE.

They sang "The Eyes of Texas," confetti flew and Brown cupped the crystal football trophy in his hands while grown men cried. It doesn't get any bigger than that.

And for nine months Brown didn't have to hear "When are you going to beat Oklahoma?"

"I'm glad this game is back to where it is instead of about how I screwed up," Brown said Monday.

It didn't get him a lifetime pass. A bad game by a freshman quarterback and a loss Saturday could stir up some really bad memories.

The Sooners have the best player in Peterson. But put 11 on 11 and Texas has better talent and arguably a better all-around coaching staff.