14:02 - Terrence Nunn 75 pass from Zac Taylor. On the second play of the game, Taylor rolled out to the left and found Nunn wide open down the left sideline. Anthony Webb, perhaps thinking Taylor would scramble, was seven yards behind Nunn when the catch was made. Nunn went untouched for six. Jordan Congdon kick. (Nebraska 7, Kansas 0).

:23 - Jordan Congdon 21 field goal. A long drive stalled after Kansas finally was able to stop the run. An Eric Washington near-interception forced fourth down, and Congdon converted on the chip shot. (Nebraska 17, Kansas 0).

11:45 - Brandon McAnderson 1 run. Adam Barmann finally got going, throwing accurate passes for the first time all game. He found Dexton Fields on completions of 30 and 15 yards, Jon Cornish for an eight-yard gain and Derek Fine in a seam for a 40-yard gain. On first and goal from the one-yard line, McAnderson bulled into the end zone up the gut. Scott Webb kick. (Nebraska 17, Kansas 7). 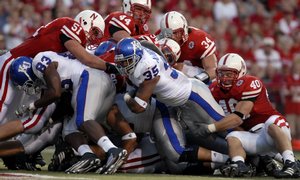 6:51 - Frantz Hardy 78 pass from Taylor. Another rollout pass burned KU's secondary. This time, Taylor rolled right and just before hitting the sideline threw a strike to Hardy going left to right. Hardy went around the edge and easily ran right around a slower Sadiq Muhammed and into the end zone. Congdon kick. (Nebraska 24, Kansas 7).

:00 - Scott Webb 31 field goal. Kansas drove 56 yards on 12 plays, mainly by passing the ball. Barmann found Dexton Fields twice for 29 yards and Derek Fine for an 18-yard gain, but Kansas failed to get in the end zone. Webb booted it through despite a high snap. (Nebraska 24, Kansas 10).

12:01 - Cornish 8 run. Kansas gave itself great field position when defensive end Russell Brorsen forced a fumble that Joe Mortensen pounced on at the NU eight-yard line. The next play, Barmann optioned right to Cornish, who went into the corner of the end zone untouched. A bad snap made Kansas unable to get a kick off. (Nebraska 24, Kansas 16).

5:47 - Webb 35 field goal. After a forced fumble by Joe Mortensen, Kansas drove into field-goal range thanks in part to clutch receptions by Dexton Fields. Barmann threw two incompletions to force fourth down, and Webb booted the field goal through. (Nebraska 24, Kansas 19).

6:47 - Derek Fine 1 pass from Adam Barmann. Kansas moved 88 yards on 12 plays, the big boost a 46-yard deep ball from Barmann to Brian Murph. After two runs couldn't get Kansas in the end zone, Barmann play-actioned and found Fine on the right for the score. Barmann was sacked on the two-point conversion. (Kansas 25, Nebraska 24).

4:13 - Frantz Hardy 75 pass from Zac Taylor. Facing third-and-long deep in its own territory, Taylor threw a deep ball to Hardy, who was being covered by Blake Bueltel. Bueltel appeared to get disoriented, and Hardy hauled it in and ran right by him for the score. Taylor found Nate Swift at the goal line to convert the two-point play. (Nebraska 32, Kansas 25).

:46 - Brian Murph 26 pass from Adam Barmann. Kansas marched downfield yet again with inspiring perseverance. An 11-play, 81-yard drive finished when Barmann swung out right, then found Murph over the middle about 10 yards downfield. Murph went right to left into the corner of the end zone for the score. Scott Webb kick. (Kansas 32, Nebraska 32).

Cody Glenn 1 run. Zac Taylor hit Nate Swift on the left side for a 21-yard reception, putting the Huskers at the one-yard line. Glenn ran it in on the next play to the left side. Congdon kick. (Nebraska 39, Kansas 32).