Norman, Okla. — With Barry Switzer on one side and Tom Osborne on the other, no rivalry was bigger than Oklahoma-Nebraska.

When the Sooners and Cornhuskers collided, the impact could be felt throughout all of college football. Between 1971 and 1988, the teams met 17 times when both were in the top 11, including 15 times with both in the top 10. Their 1971 meeting as No. 1 vs. No. 2 went down as "The Game of the Century."

Former Sooners quarterback Cale Gundy, now an assistant coach with Oklahoma, remembers watching some of those classic matchups. The suspense was unbearable.

"I'd run outside because I don't want to see the play on TV. I'd come back inside and figure it out or my mom sticks her head out and tells me what happened," Gundy said.

The rivalry has lost its luster in recent years, but on Saturday at the Big 12 title game in Kansas City, Mo., Oklahoma and Nebraska will be playing for a championship again - for the first time in 18 years.

"It's a big-time game regardless of who we're playing," Nebraska linebacker Stewart Bradley said. "But when you put Oklahoma and Nebraska in the game with all the tradition, it makes it that much bigger."

Chuck Fairbanks was coaching Oklahoma and Bob Devaney was at Nebraska in 1971, when Johnny Rodgers led the top-ranked Cornhuskers to a 35-31 victory over the second-ranked Sooners.

In 1972, Osborne took over for Devaney and a year later Switzer replaced Fairbanks. For the next 15 years, the Big Eight was the Big Two with the Sooners and Cornhuskers fighting for supremacy. 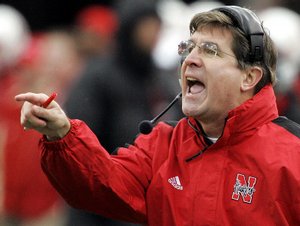 Nebraska coach Bill callahan instructs his players against Texas on Oct. 21. The Cornhuskers will renew their rivalry with the Oklahoma Sooners in Saturday's Big 12 title game.

"It wasn't just a game, it was the good guys against the bad guys. Good against evil. Tom Osborne against Barry Switzer," said Bill Barnett, a defensive tackle on Nebraska's 1978 team that upset top-ranked Oklahoma 17-14. "In our eyes, Tom was the good guy and Barry was the bad guy, but Barry always figured out a way to get the best of us."

Switzer won his first six against the 'Huskers, leading up to that 1978 game.

"The games usually went right down to the final minutes, but 'Sooner Magic' was out there waiting to show its ugly face," Barnett said. "So when we finally beat them in 1978 it was like toppling an empire."

Nebraska or Oklahoma won the Big Eight title outright or had a piece of it every year from 1962 to 1988.

"What really makes (the rivalry) good is everybody steps it up - it makes for a heck of a game," Rodgers said.

Rodgers ('72) and Mike Rozier ('83) won Heisman trophies for Nebraska during the Golden Age of the rivalry. Billy Sims won it for Oklahoma in 1978. It was power football at its best in those days, with quarterbacks such as Nebraska's Turner Gill and Oklahoma's Jamelle Holieway who were more dangerous with their legs than with their arms.

But after Switzer resigned in 1988, the rivalry began to fade as the Sooners fell on hard times.