Jackson does job on glass 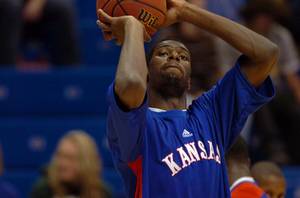 A two-point victory over the top team in the country should be enough to motivate anyone for a few weeks on adrenaline alone.

The hefty big man was able to take some joy in his 13-point, 11-rebound performance in Tuesday night's 83-32 blowout of Dartmouth because he consistently followed his own advice - rebound, rebound and then rebound some more.

"I just kept repeating to myself, 'Go to the glass, go to the glass,'" Jackson said. "Even if I'm on the court, I try to remind myself. Everybody has a responsibility. All of the bigs have to crash the boards. Lately, I've been slacking on the rebounds a little bit."

Jackson said the inner conversation came mostly before Tuesday's game, and he picked a prime opportunity to listen to the little guy in his noggin. Dartmouth's severe size disadvantage helped the Jayhawks out-board the Big Green, 52-23.

"Well, they missed shots, and we're a lot bigger than they are, so we should have had a huge advantage from a rebounding standpoint," KU coach Bill Self said. "Because they weren't very big."

Still, though, Jackson played like the warrior his inside voice wanted him to. He had a five-stitch-worthy cut above his left eye to prove it following a collision in the paint, which kept him from shooting the back end of a two-shot trip to the free-throw line in the first half.

Jackson said his next focus, now that rebounding intensity hopefully is no longer an issue, is conditioning.

Dartmouth's 19 turnovers forced KU into a lot of transition, high-speed offensive execution. Jackson also said he made some mistakes as far as moving without the ball. Luckily for him, he's not content just to settle for a solid double-double against an overmatched opponent.

"There were a lot of things I messed up on. I was just making mental mistakes," Jackson said. "I need to focus on my main points and just go get it."

You have to just love that attitude. I wonder if his teammates all have that same intensity and focus. If they all do, this team should go a long way.