Ailing Big Green off to 0-5 start

It has been about as rough a start to the season as one could imagine for Dartmouth College's men's basketball team.

The winless Big Green, 0-3 on the road and 0-2 at home, enter today's 7 p.m. battle at No. 5 Kansas with five injured players listed as "doubtful."

Sudden lack of depth certainly has weakened the Big Green, who fell to Siena, 83-69, Wednesday at home and 60-50 Saturday at Hartford.

"I think you need to be able to rest guys," Dartmouth coach Terry Dunn told the Valley News after the Siena setback. "We may have lost some of our aggressiveness defensively, because we were a little tired."

Dunn's Big Green, who have allowed an average of 78 points a game while scoring 54.4, allowed 51 points in the second half of the Siena game.

Junior guard/forward Johnathan Ball, who missed the first two games of the season because of a quadriceps injury, responded with 18 points against Siena and 12 versus Hartford.

"In a game like today, when you have so many players sitting out, you just know you have to step up and just play," Ball said after the Siena game.

Ball, who averages 12.0 points a game and is Dartmouth's only double-digit scorer, has made 15 of his last 24 shots.

The injuries - as well as a tough schedule - have combined to deck Dartmouth, a team picked to finish last in the eight-team Ivy League. 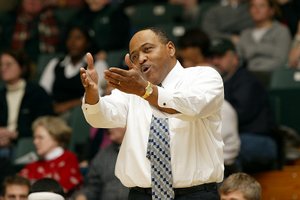 The Big Green also will play at Vermont and Army before the start of the conference campaign. It's reminiscent of a year ago, when Dartmouth played 15 of its first 19 away from Leede Arena on the campus of the Hanover, N.H., school.

"After we played very well at Boston College in our first game (80--61 loss) and beat UC Davis (66-61), we lost three or four close games," said third-year coach Dunn, who worked as an assistant at Colorado for eight years.

"At that point, our psyche and swagger left us. I also thought the lack of experience hurt us in crucial games and situations where it very easily could have gone Dartmouth's way."

"We tried to balance the home and away nonconference schedule," Dunn said. "We've discontinued some previous long-term opponents like Albany and started some new ones. We've got UMass, Kansas and George Washington. It's a chance to find out early on what our strengths are as a team."

¢ Dartmouth is located in Hanover, N.H. The school, founded in 1769, has an enrollment of 4,300. Nickname is Big Green. Colors are Dartmouth Green and White. Conference affiliation is Ivy League.

¢ Penn was tapped first and Princeton second in the preseason Ivy League poll.

¢ Dartmouth coach Dunn is in his third season with a 17-37 record. Dunn was an assistant for eight seasons at Colorado (1996 to 2004). He worked with players such as Chauncey Billups and David Harrison in Boulder.

Let's just hope that Self plays a lot of reserves and some different defensive formations to try some new things. As long as the starters get a nice cushion of points for the rest of the squad, we should be treated to a nice showing of walk-ons and 3rd tier reserves.

Nothing against Dartmouth, but they are obviously thin in their rotation right now, we're too deep and nothing is expected out of this other than a (relatively easy) win.

Let's try to keep our focus and key in on the things we want to do when we play DePaul later this week. This should be a nice tune-up.

Bologna!! Start looking towards DePaul, and Dartmouth will hit 85% from behind the ark, and we'll shoot 28% from the free throw line. I don't care if they are hurt, that sucks, hope the kids get healthy, but no one is too bad to overlook...

Didn't KU play at The Palestra (Penn) one year. The article missed that in their record against Ivy league schools.