By By Mike Jones - McClatchy Newspapers 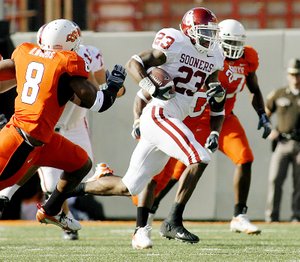 Oklahoma running back Allen Patrick (23) runs past Oklahoma State safety Donovan Wood (8). Patrick ran for 163 yards and a touchdown in the Sooners' 27-21 victory against the Cowboys on Saturday in Stillwater, Okla.

Holmes got enough of it. The deflected ball sailed just beyond Woods' fingertips, and the Sooners' dramatic 27-21 victory over Oklahoma State on Saturday was finally safe.

Kansas City, here the Sooners come. Believe it or not.

A team rocked early by controversy and later by injuries completed its improbable march to the Big 12 Championship Game with a fourth consecutive victory in the Bedlam Series.