Austin, Texas — Stephen McGee had taken so many hard hits, he was throwing up. But yard by yard, McGee and the Texas A&M Aggies were pounding out six years of frustration in their rivalry with Texas.

With a stingy defense and two long scoring drives in the first and fourth quarters, the Aggies finally got past the Longhorns with a 12-7 victory Friday that they hope signals their return to prominence in the Big 12.

McGee, battered by the heat and the beating he was taking while running the option, punched in the winning touchdown with an eight-yard run with 2:32 to play.

The Aggies churned out 244 yards on the ground against the nation's top rush defense. They snapped a six-game losing streak to the Longhorns and won in Austin for the first time since 1994.

"People have said this rivalry was dead," said Aggie offensive lineman Kirk Elder. "It feels great to get it going again."

The Longhorns struggled with only 230 total yards and quarterback Colt McCoy was intercepted three times in his worst game of the season.

The redshirt freshman was also carted off the field with 20 seconds left after taking a hit on a pass and it appeared that his head whipped to the ground. He raised his left hand to the crowd of 89,102 as he left the field. Team officials said McCoy had use of all his extremities and was taken to the hospital for observation.

Texas coach Mack Brown said he didn't see the hit but noted the boos from the crowd. 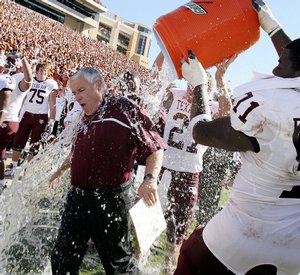 TEXAS A&M COACH DENNIS FRANCHIONE is DOUSED By water following his team's victory against Texas. The Aggies upset the No. 11 Longhorns, 12-7, on Friday in Austin, Texas.

For fourth-year coach Dennis Franchione, it was the signature win he needed to get some of the hard-core Aggies critics off his back.

"Did I have any?" Franchione joked. "I know it's an important game to win. But, you know, I'm kind of secondary in all of this. The players have been everything that's mattered this year."

Franchione is 2-10 against Texas, Texas Tech and Oklahoma in the Big 12 South, but has guided the Aggies to their first nine-win season since they won 11 and the league title in 1998.

"This is going to change a lot of things for Texas A&M football," senior Aggie safety Melvin Bullitt said. "We beat the defending national champions at home."

Texas (9-3, 6-2) could have won the South division title with a victory but now needs Oklahoma to lose to Oklahoma State today. If the Sooners win, it will be OU playing Nebraska for the league crown on Dec. 2.

"I've gotten spoiled like everybody else," Brown said. "It's been a long time since we haven't won 10. It's disappointing for everyone."

McGee, who was 7-of-13 passing for 58 yards, ran for 95 yards on 18 carries. The Aggies drove into Texas territory only three times but chewed up yards and critical minutes in the fourth quarter.

Texas led 7-6 lead in the third on Jamaal Charles' six-yard TD run and had the Aggies pinned at their own 12 after a punt early in the fourth.

Texas A&M converted four third downs on the winning drive, including a 14-yard run by McGee three plays before his touchdown run. The Aggies converted 10 of 16 on third down in the game.

"They methodically moved it down the field on that last drive," Texas co-defensive coordinator Gene Chizik said. "We just couldn't close the door on third down."