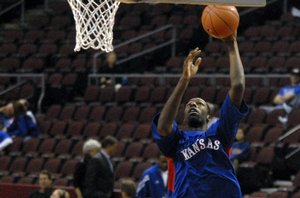 Las Vegas — As a player, Ronny Thompson would try to tell Alonzo Mourning what to do and where to go on the court. Mourning seldom responded and seemed to tolerate it because of the immense respect he had for Thompson's father, Hall of Fame coach John Thompson, formerly of Georgetown.

As the No. 2 assistant at Arkansas a year ago, Thompson similarly was not shy about expressing his opinions forcefully.

Now that he's the head coach at Ball State, Thompson appears he isn't about to wait to treat the media with the sort of disdainful attitude generally reserved for more experienced, more accomplished coaches.

When one of the Ball State players was asked about the team's poor shooting performance by a reporter, Thompson interrupted, shaking his head from side to side and seemingly on the verge of a roll of the eyes, and said, "I think Kansas had trouble shooting, too."

In bizarre fashion, Thompson then began almost interviewing his three players who shared the podium with him.

"Do you think that was because of what you did or what Kansas did?" Thompson asked.

It wasn't clear whether he meant Kansas' poor shooting or his team's poor shooting when he asked that question, and since the purpose of the postgame session was supposed to be for the media to ask questions and the people of whom they were asked, none of the reporters in the room seemed to care what Thompson meant by the question.

Ball State made 34 percent of its shots in the game and turned over the ball 19 times. Compared to the postgame effort of their coach, the Cardinals performed brilliantly.

Ronny Thompson's brother, John Thompson III, is restoring Georgetown to Big East and national power status quicker than anyone could have expected. Ronny Thompson is 2-2 as a college head coach.