KU not blinded by Glitter City

Las Vegas — Like most blue-chip basketball recruits, Darrell Arthur has been in Glitter City many times before, the last time the summer of 2005 with his Team Texas AAU team.

"It was hot," Arthur, Kansas University's freshman forward, recalled of the dogs days of July, when AAU basketball heats up in Vegas. "Hot and a lot of people: That's what I remember. It's a good environment. I like the place."

Needless to say, he's looking forward to today's 7 p.m. Las Vegas Invitational game against Ball State and Saturday's 10 p.m. contest against Florida at Orleans Arena, and not just because temperatures have dipped into the 60s this time of year.

"I haven't been out of Kansas since summertime, so it's fun to be around the guys building team chemistry off the court," Arthur said.

Indeed, trips such as this one can be as important in terms of team bonding as well as the win/loss record.

"There are different phases every season where a team becomes a team, and a lot of times it's when you get a chance to get away from all the distractions around home, or around school, and hopefully this is the case," KU coach Bill Self said. "Hopefully, it will work well for us. Last year, it did not work well for us in Maui at all. Not that we lost, but that we didn't come out of it being a lot better. Hopefully that will not occur this trip. We were totally deflated when it didn't go well out of the chute last year."

Like Maui, Vegas is a fun place to play a big-time tourney.

"I like Vegas a lot. I've never been there when I was 21," sophomore Brandon Rush said of the gambling mecca. "I don't know what it's like (in that regard)."

And he won't find out this trip: The Jayhawks are allowed to walk down the famed Strip but not make any wagers.

"It's all business," Rush said of a trip in which the players have a 10 p.m. curfew. 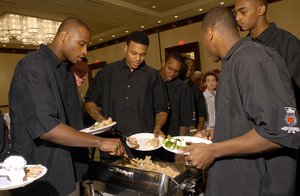 Tonight's business involves trying not to look past a 2-1 Ball State team that has defeated Northern Colorado (81-42) and Prairie View A&M (65-48) and lost to Tennessee-Chattanooga.

"If you prepare, you have a better chance. We've already been bitten once this year," Self said of a loss to unheralded Oral Roberts. "We weren't prepared to play. Our attention and focus will be on Ball State. If I'm not mistaken, Ball State beat Kansas a few years ago."

"I'm sure the media will bring it up in the paper. We'll talk about the last time these two teams met and say, 'See what happened : ," Self said. "That was a No. 1 seed Kansas team (that reached Final Four). For Ball State to beat Kansas' they had to have good players, as they do this year."

"We've got one tape. My impressions are he'll be a very defensive-minded coach," Self said. "He'll emphasize that and do things defensively to create havoc. They didn't shoot well at all against Chattanooga (29.2 percent). The law of averages seems to prevail a lot of times the following game. We need to be on top of our game Friday."

And not look past the Cardinals, who have double-digit scorers in guard Jalon Perryman (13.0), forward Anthony Newell (11.7) and forward D'Andre Peyton (10.7).

"It's not about playing Florida. We've got Ball State and have to get off to a good start," junior Russell Robinson said. "We have to do what we can do to get better."

"We don't talk about Florida at all. We can't look past Ball State," Rush said. "It's a big game for us. I'd say we are looking forward to playing against good competition in Vegas against both Ball State and Florida. They are two good teams."

Julian Wright added: "Our team has to come out with intensity every day. We learned that and we have to take that mind-set into the Ball State game. We know they are talented just like we are and will be read to play."

Wright is right. The intensity needs to be there regardless of the opponent. There are always things to improve. Focus on those things and the game will take care of itself. Go 'Hawks!