The music was blaring when his phone rang. Tony Sands turned the volume down and listened to the stranger on the other end.

Your greatest athletic achievement, the voice said. Take me through it, step by step.

It seemed to be on the tip of Sands' tongue, ready to be told. Fifteen years can do so much for perspective, and the pride Sands has for his magical day, in hindsight, drenches every word.

With many ice-cold strips of bleachers staying vacant, Sands achieved football greatness on the field below. The pint-sized Kansas University running back ran the ball 58 times for 396 yards in a 53-29 KU victory over Missouri.

Those numbers - 58 and 396 - always will go together in KU football history.

Both rushing totals were NCAA records at the time. His yardage total has since been eclipsed by TCU star LaDainian Tomlinson, who hit 406 in a 1999 game.

But the memories will last longer than any record possibly could. Sands breaking down into tears after the game. KU coach Glen Mason giving Sands a game ball, arm tightly wrapped around the little guy's shoulder pads. The rock chalk chant echoing in the locker room, following KU's completion of a winning season for the first time in 10 years.

Sands envisioned this when he arrived at Kansas in 1988. He lived through three losing seasons, following his mother's advice that it would all be worth it in the end.

"I wanted to be the greatest," Sands says now. "I wanted to be one of the top running backs to ever leave that place. And when they started talking back about Kansas, I wanted my name to flash up there with Gale Sayers."

It now does - thanks to a legendary exclamation point on a little career that could. 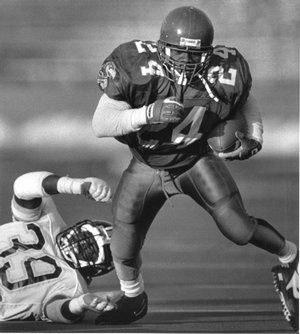 The list of witnesses surely has grown since. But the estimated attendance at Memorial Stadium that day was just 28,000 fans.

Blame the weather. The wind gusts were enough to burn faces, and temperatures stayed around freezing throughout the game.

"The coldness," Sands says. "It was really cold that day."

But more than anything, blame the fact that history sometimes sneaks up on us, and witnessing it often is an agonizing game of chance. Yeah, Missouri's run defense had proven to be terrible, and Sands already hit 1,000 rushing yards for the second time in his career.

Still, nobody could've anticipated what would happen that day. How could you?

Former offensive lineman Keith Loneker sensed something different about Sands. At a team meeting the night before the game, Loneker recalls Sands - all 5-foot-6, 175 pounds of him - standing up to address his team before his last collegiate game.

"You could tell by the look in his eye," Loneker added, "that he was flat ready to go."

Sands' game started strongly: A gain of eight, a gain of seven, a gain of 19 - three carries for 34 yards. Later in the first quarter, he picked up 22 yards up the gut. A six-yard touchdown run put Sands at 68 yards on nine carries after one quarter.

Kansas was up 10-0 after one, but a big factor in helping Sands make history was Missouri's early resiliancy. The Tigers scored 22 points in the second quarter, and even though Sands added an eight-yard touchdown run before halftime, The Jayhawks' lead was just 25-22.

A lot of football left. And enough of a reason why Mason and the KU coaching staff had to stick with what was working.

"There was nothing they could do to stop the run that day," Loneker said. "It was just out of control."

Sands had 24 carries for 156 yards at halftime. But with Kansas up only three, his legs weren't done working yet.

Sands claims he felt fresh after that game, and the extent of the trauma from carrying the ball 58 times - still an NCAA record - amounted only to a temporary case of cramping later that night.

"I wasn't sore at all," Sands said. "If we had another game that week, I could've went through all the practices."

At halftime, there was still no sense of what was coming. Sands said that fellow running back Chaka Johnson informed him of his rushing totals, but stats always take a back seat in a close rivalry game.

"It never dawned on me," Sands said. "Coach Mason at that time, he was never big on the numbers."

Sands obviously was the one thing Missouri couldn't stop, though. He opened up the third quarter with a run up the middle for three yards, followed by a run left for three more, followed by a breakthrough run straight ahead for 38 yards.

That ended up being his longest gain of the day, and it put Sands at 200 yards on 27 carries. In hindsight, he was just more than halfway done.

"We were doing that all day," Loneker said. "We were just in the zone. We were walking up and talking to the other team, saying 'You think this is going to be a pass? Nahhh!'"

Kansas, in fact, passed the ball just 14 times compared to an astonishing 82 running plays. Besides Sands, quarterback Chip Hilleary had 13 carries for 80 yards, including a four-yard touchdown run in the third quarter.

Sands added his third score, from nine yards out, late in the third. Just 44 seconds later, he scored again on a seven-yard run to begin the fourth quarter.

At 46-29, the game finally was out of reach. But single-game records suddenly became within reach for Sands - who appeared to have the stamina to make a run at them.

"You came to realize he was running harder toward the end of the game," former safety Charley Bowen said. "It seemed like he had more energy."

Without even knowing the stats, '91 team members claim late in the third quarter was when the sideline started to get a sense of what was brewing.

"Probably around then, I think we got wind of it as players," Sands said. "The coaching staff said 'Hold on. We're close to a BIg Eight record (342 yards).'

Per Mason's orders, Sands kept getting the ball. Eventually, he broke free for 16 yards. Then a gain of five. Then seven more.

At one point, Loneker recalled teaming up with guard John Jones to mock the Mizzou defensive front.

"John was coming up to the line of scrimmage," Loneker said, "and he was like 'Hey Lonnie, where do you think the ball's going to go on this play?'"

Sands had a one-yard gain for his 50th carry. As the game drew to a close, Sands finished in spectacular fashion - as if he hadn't done his job already.

His last four carries were for 19, no gain, seven and seven.

"I can remember the last play as clear as day," Sands says.

Kansas called a timeout after it, and Loneker put Sands on his shoulders and carried him off the field - 58 carries and 396 yards after the day began, and 20 seconds still left on the clock.

Kansas would beat its rival by 23 points to lock a 6-5 record. It was KU's first winning season since 1981.

Added Bowen: "It couldn't have happened against a better team. I know that."

Sands finished his career as KU's single-game, single-season and career rushing yards leader. Statistically, he was the greatest - just as he aspired to be four years earlier.

"I take great pride in that," he said.

Now 38, Sands lives near Fort Lauderdale, Fla., working as a speed trainer for NFL athletes. His oldest son, Maxie, is a student at Florida Atlantic University, while his youngest, DeShaun, is a star running back for Monarch High in Coconut Creek, Fla. DeShaun is just a sophomore, though Sands says "He's taller than me and bigger than me now."

But for one day, it was impossible to be any bigger than Sands was. And considering all that came of the accomplishment - NCAA records, a winning record and a Border War win, to name a few - it's a day that will be hard to forget in KU football lore.

"I can't say enough about Tony as a person," Loneker said. "It's great for anybody to rush like that for the offensive line and the running backs, you know?

"But if you knew Tony, you knew just how big that was. It was just unbelievable - there was nothing better."

If there were only 28000 there, I was one of them. Other than Tony, the biggest thing I remember was the weather. The temperature was probably mid-20s, but the wind, moisture in the air, made it one of the coldest, rawest days I remember. And I grew up in northern Iowa. The other thing I remember is he never broke off a long one, just power pitch right, power pitch left.
That night was the opening of the home basketball schedule. Tuxedo Tony showed up to a standing ovation. Another class act football player who never got the props he deserved, a situation we need to change.