No. 12 Memphis zips past Oklahoma 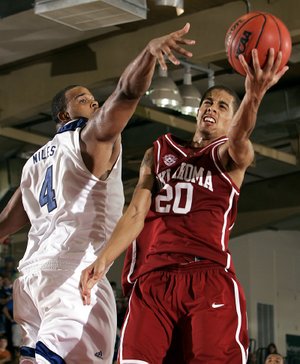 Oklahoma guard Austin johnson, right, shoots under pressure from Memphis guard Pierre Niles in the second half of a Maui Invitational matchup. No. 12 Memphis beat Oklahoma, 77-65, Tuesday in Lahaina, Hawaii.

"We're a team trying to play fast," he said.

The 12th-ranked Tigers did just that Monday in a 77-65 victory over Oklahoma in the opening-round of the EA Sports Maui Invitational.

The Tigers were far from perfect, committing 18 turnovers and missing 17 free throws, but their speed and balanced attack made life miserable for Oklahoma, which had 21 turnovers.

"Memphis did a great job of spreading the floor and driving. That's a very unselfish team," first-year Oklahoma coach Jeff Capel said. "Their pressure took us out of a lot of things we like to do."

Robert Dozier had 13 points to lead Memphis, which starts three sophomores and a freshman and had eight players score between 13 and six points.

"That's our style of play," sophomore guard Antonio Anderson said. "Coach makes a point that one of us doesn't have to be the star and that together with that equal balance we can do what we like to do."

Memphis took control at the start of the second half by hitting seven of its first 10 shots to lead 58-42 with 12:04 left.

Oklahoma (2-1) drew within 10 points twice, the last at 69-59 with 4:36 left on two free throws by Michael Neal. The Tigers, however, were able to improve their foul shooting and keep their lead over the final 21â2 minutes.

Neal, who missed the Sooners' first two games because of a suspension over playing in an unsanctioned summer league, finished with 18 points. Taylor Griffin added 16 points and 10 rebounds.