A bunch of NBA prospects will be showcasing their skills tonight in Allen Fieldhouse.

Not all of them will be wearing Kansas University jerseys.

One guy who has the eye of pro scouts is Towson University senior Gary Neal, a 6-foot-4, 200-pound sharpshooting guard who led the country in scoring last season at 26.1 points per game.

"I've had some guys who could score points, but I think Gary is certainly one of the best scorers I've ever coached. He's the purest scorer I've ever had," third-year Tiger coach Pat Kennedy said. "He can score long, mid-range, going to the basket. He can play the lead-guard spot as well."

The Towson Towerlight newspaper reports the Cleveland Cavaliers, Charlotte Bobcats and New York Knicks are among the teams that have contacted the Tigers about obtaining a practice schedule to take a close in-season look at Neal.

"We've been very fortunate to have some NBA teams come to our practices, and they've all been very impressed by him," Kennedy said of LaSalle transfer Neal, who hit 62 of 153 threes and 106 of 132 free throws last season, his first at the Colonial Athletic Assn. school.

"He's a professional basketball player somewhere in this world," Kennedy said, "and I'd like to see him make it in the NBA."

An Aberdeen, Md., native, Neal scored a career-best 41 points off 13-of-24 shooting (seven of 12 threes) in Towson's 69-62 victory over Samford on Thursday after totaling 20 points in a season-opening 78-64 win over Hartford. 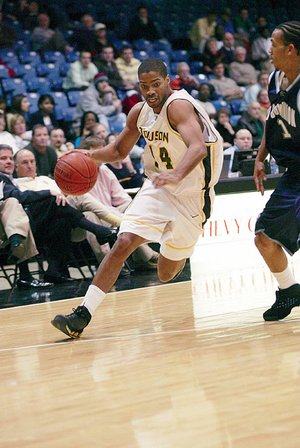 "Some of the shots he can make are just amazing. He is not a good shooter. He's a great shooter," noted Kennedy, who also has been head coach at Iona, Florida State, DePaul and Montana.

KU will be wary of Neal, especially after Marchello Vealy lit up the Jayhawks, hitting seven threes in Oral Roberts' 78-71 victory over KU on Wednesday night.

"I've watched tape. He can get it going both ways," KU coach Bill Self said. "We need to be able to do a much better job on the opponent's best player. If we allow him to have a big night, he could go for 40."

KU junior Russell Robinson, who might take a turn guarding Neal, said: "We know they've got a good player. We've got to do what we've got to do to negate that and not let him get comfortable and pressure. I think we'll do a good job playing defense."

Freshman Darrell Arthur believes the Jayhawks are capable of slowing the top scorer.

"We're probably going to approach him like we did against (Stephen) Sir from Northern Arizona - play tight on him and make him handle the ball a little bit more," Arthur said.

Sir, who led the country in three-point accuracy a year ago, scored just nine points off 3-of-5 three-point shooting in KU's 91-57 season-opening victory over the Lumberjacks.

Neal scored 30 or more points in seven of the 17 games he played last season. He missed the first seven contests while waiting to satisfy NCAA transfer requirements and four of the last five because of a stress fracture in his left foot.

"The best way to help my team is be a well-rounded player, play defense, be able to guard the other team's best player, be able to get five, six, seven rebounds, a couple steals, a couple offensive rebounds," Neal told the Towson Towerlight. "To do that I needed energy. I needed to be able to breathe."

So Neal, who weighed 227 at one point last season, lost almost 30 pounds in a summer conditioning program, focusing on college instead of early entry in the NBA.

"I looked at it like getting into condition is something that's not going to hurt me, so why not (return)?" said Neal, who worked out with Gilbert Arenas of the Washington Wizards and Delonte West of the Boston Celtics after last season.

"For the most part I feel I can play with those guys," Neal said. "I felt that way and believed that before I played with them, and playing with them and against them it didn't change my mind any (about returning to school)."

One thing is for sure: Neal won't be shy when the ball is in his hands tonight.

"Our goal all along has been to get into our league's upper group," said Kennedy, who went 6-23 his first season and 12-16 last year. "If we can stay healthy and come together as a team we'll be in the thick of things around tournament time."

¢ Coaching great: One of the top 25 active winningest Div. I coaches with 436 victories, Kennedy likes what he's building at Towson.

"To me, now that we've gotten the program to this point : now the goal is 20 wins," Kennedy told the Towerlight. "If you are in the top three or four of the league right now, you're going to be a postseason team. And, boy, wouldn't that be wonderful for Towson going into every season thinking we can be in the top three or four of the CAA every year? Now you just completely take your name from the bottom of the group and put your name at the top of the group."

Is the 1952 KU team being honored tonight at AFH?