By By Erik Boland - Newsday

Columbus, OH — Players fought their way from the field to the locker-room tunnel through the horde of scarlet-and-gray-clad humanity that flooded the field Saturday after shaking this ancient concrete and steel structure on its foundation since the gates opened more than two hours before kickoff.

In one of the most anticipated and hyped regular-season college football games in recent memory, No. 1 Ohio State held off No. 2 Michigan, 42-39, a game played in the shadows of the death of the patron saint of Wolverines football, former coach Bo Schembechler, who died Friday morning of heart failure. Ohio State (12-0), which earned its first outright Big Ten title since 1984, clinched a berth in the BCS national championship game Jan. 8 in Glendale, Ariz. Michigan (11-1) likely is headed to Pasadena and the Rose Bowl.

"Aren't you guys tired?" Ohio State Coach Jim Tressel asked the throng of media in his postgame news conference. "I don't know where to start."

A good place would be OSU senior quarterback Troy Smith, who entered the game the leading candidate to win the Heisman Trophy and likely secured the award, though he had to overcome three second-half turnovers to do it.

Smith threw an interception and lost two fumbles, miscues that led to 10 Michigan points and allowed the Wolverines to rally from a 14-point halftime deficit that Smith was almost solely responsible for producing.

Smith went 21-for-26 in the first half for 241 yards and three touchdowns as Ohio State took a 28-14 lead. The Buckeyes had 320 total yards of first-half offense against a Michigan defense that came in allowing 29.9 rushing yards per game, 231.5 yards overall per game and just 12.1 points. Smith finished 29-for-41 for 316 yards with four touchdowns and one interception and increased his record against Michigan to 3-0. 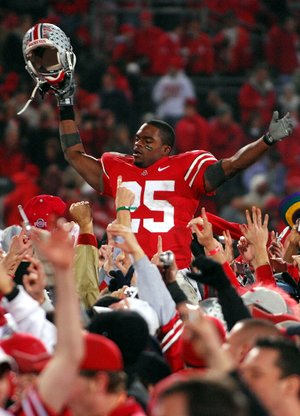 "It's not me who beats Michigan; it's the team," Smith said. "My hat's off to the University of Michigan. They fought hard and battled down to the last second. I'm really at a loss for words right now."

Smith, after throwing for just 9 yards in the third quarter and watching the Wolverines pull to 35-31 early in the fourth, engineered his most important drive of the season as a trip to Glendale looked in doubt for the first time all afternoon.

The OSU defense shut down the Wolverines after they recovered a Smith fumble at the Michigan 28, but Michigan clearly had momentum and pinned the Buckeyes back at the 17 with 10:38 left. Aided by a 26-yard run by Antonio Pittman, who ran for 139 yards, which included a 56-yard touchdown run midway through the third quarter that gave Ohio State a 35-24 lead, Smith moved the Buckeyes to the Wolverines' 13. On first-and-10, Smith delivered a dead-on strike to Brian Robiskie in the right corner of the end zone, giving Ohio State a 42-31 lead with 5:38 left.

Michigan quarterback Chad Henne, who was 21-for-35 for 267 yards and two touchdowns, tossed a 16-yard touchdown pass to Tyler Ecker with 2:16 left. The two-point conversion pass to Steve Breaston that followed pulled Michigan to 42-39, but Ted Ginn Jr. recovered the Wolverines' onside kick at the 48 to send a crowd that had seemed to be tailgating since Monday into ecstasy.

"The fans were electric; what an atmosphere," OSU senior center Doug Datish said.

An atmosphere Michigan junior running back Mike Hart, who had 142 yards and three touchdowns on 23 carries, said impacted the game. He fired the first salvo politicking for a rematch in the title game, a slim possibility but not impossible if a slew of upsets follow in the coming weeks.

"I think we're both the top teams in the country, regardless of what anyone says," Hart said.

Plenty will be saying it after Saturday.