"Fortunately for us, it's only November 18th, and we have some time," Altman said. "We're a bad basketball team right now."

Freshman Ryan Anderson scored 19 points, including the go-ahead three-pointer, to lead the Cornhuskers (2-0).

The Huskers, who shot 27 percent in a 70-44 loss to the Bluejays last season, hit 67.6 percent (25-of-37) from the field while ending a seven-game losing streak in regular-season games against their in-state rival.

Anderson had the hottest hand, making his first six shots and finishing 7-for-8.

"I said at the beginning of the season that this was one of my goals," said Richardson, a senior. "We've never beaten them at home since I've been here. This gives the program a lot of confidence as we go on into the season." 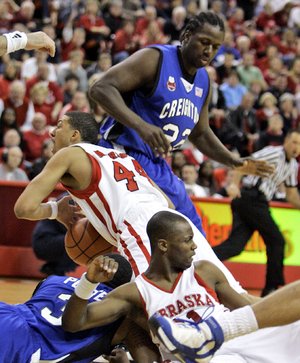 Anderson's three-pointer with 12:57 left broke a 42-all tie, and Nebraska never trailed again.

White's two free throws gave Nebraska a 58-51 lead with 4:16 left. Funk hit one of his seven threes to pull Creighton to 58-54, but White made a three with one second on the shot clock to make it a seven-point game with 3:30 left.

Nebraska scored on each of its last 13 possessions to keep the Bluejays at bay.

"Our guys read the paper and watch TV, and they saw that not very many people thought we had a chance to win this game," said first-year Nebraska coach Doc Sadler. "When you hear that all week long, you can either get scared with four or five minutes left or you can gut it up. Our guys had no doubts, and they gutted it out for the win."

The Bluejays were hamstrung because 6-foot-9 center Anthony Tolliver, their best matchup against the 6-11 Maric, got into early foul trouble and picked up his fourth with 9:05 left.

Nebraska, down 31-28 at half, opened the second half with a 12-2 run to take a 40-33 lead. Creighton responded with its own 9-2 run as Funk and Isacc Miles hit back-to-back threes to tie it at 42. Anderson responded with a three to give the Huskers the lead for good.

Marcus Elliot scored 17 points for the Bulldogs (0-2). Chad McKenzie had 12 points, and Drew Washington finished with 10.

Louisiana Tech led 23-22 early, but Texas A&M responded with a 14-5 run to close out the first half.

There were four technicals, two against each team, and 48 total fouls. Thirty-two of those were against Tennessee Tech, fueling Kansas State's 32-for-43 night at the line.

Cartier Martin's 28 points led the Wildcats (3-0), who struggled to take control for much of the game before they finally put the Golden Eagles (1-1) away with an 18-4 run in the final 51â2 minutes.

David Hoskins, one of three players hit with technical fouls, added 27 points for the Wildcats. Blake Young had four three-pointers and scored 24 points for Kansas State, which appeared headed for an easy victory in the opening minutes.

Tennessee Tech missed its first seven shots - with three air balls over that span - before Amadi McKenzie scored from the lane more than 31â4 minutes into the game. The Golden Eagles hit 13 of their next 21 shots, though, and stayed close for much of the game.

Boulder, Colo. - Tim Anderson scored 24 points, and Air Force held Colorado to 11 points in the first half. Nick Welch added 18 points for Air Force (4-0), which last started out with four straight wins in the 1998-99 season, when it began 5-0. The Falcons hit 13-of-25 three-pointers, four by Anderson.

The first half output of 11 was Colorado's lowest scoring half since being held to four points in the first half of a Jan. 23, 1980, game at Missouri.