No. 1 Florida extends winning streak to 15

Humphrey broke out of a brief shooting slump, hitting five three-pointers and leading top-ranked Florida to a 93-44 victory over Chattanooga.

"It's about time Lee started making some threes," teammate Taurean Green said with a laugh. "Lee is one of the most underrated shooters in the country. He's the best shooter in the country, hands down. He had an off night the first three games. But he had the hot hand tonight."

Corey Brewer had 13 points for the defending national champions, and Green added 11 despite going 1-for-7 from three-point range.

Chattanooga doubled Joakim Noah and Al Horford most of the game, creating plenty of outside shots.

Humphrey took advantage of the open looks. A career 43-percent shooter from beyond the arc, Humphrey entered the game having made just three of 12 shots from three-point range this season. The senior improved his percentage substantially against the Mocs (1-2). 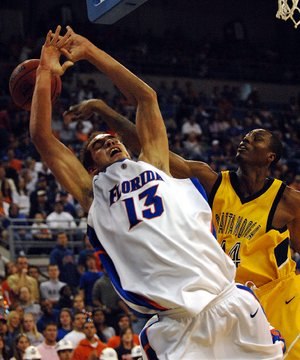 FLORIDA'S JOAKIM NOAH, left, has the ball knocked from his hands by Tennessee-Chattanooga's Khalil Hartwell. Florida won, 93-44, on Saturday night in Gainesville, Fla.

Humphrey was 5-for-7 from beyond the arc, helping the Gators (4-0) extend their winning streak to 15 games and win their 24th consecutive game against nonconference opponents.

"I felt really good. I got open looks, and our post players passed it really well," said Humphrey, who made several big shots in the NCAA Tournament. "It's felt good the whole year. It felt really good tonight."

Noah and Horford, two days after totaling 34 points and 17 rebounds, had a combined 15 points and nine boards. Noah was 6-of-10 from the free-throw line. Horford was in foul trouble much of the night.

"If you want to stop our big guys, they can do a good job of passing out of the post, and we have guys who can shoot it," Green said. "It's pick your poison."

Florida shot 54 percent from the floor and was 14-of-31 from three-point range.

Gray, the preseason Big East player of the year, drew his second foul 51â2 minutes in and didn't return until the start of the second half. But he was cut on his lower lip within seconds and needed seven stitches. The 7-footer came back with Pitt up 68-52 with 11 minutes remaining.

Milwaukee - Dominic James had 17 points and six assists to help Marquette beat Eastern Michigan. Wesley Matthews added 15 points for the Golden Eagles (4-0), who made 13 of 27 three-pointers. Devon Dumes led Eastern Michigan with 16 points. Marquette, which missed its first eight three-point attempts, closed the first half by hitting five of six from behind the arc to build a 44-32 lead.

Reno, Nev. - Nick Fazekas had 20 points and 17 rebounds to become Nevada's all-time leading scorer. Fazekas, a senior forward who shot 9-of-11 from the field with two three-pointers in only 21 minutes of play, scored 12 points and grabbed 14 rebounds in the first half. Marcellus Kemp finished with 15 points as Nevada (3-0) won its 11th in a row at home.