McCarney goes out a winner

Ames, Iowa — Iowa State's players didn't play well enough this season to save Dan McCarney's job, but their inspired effort on Saturday sent him out a winner.

Ryan Kock rushed for a career-high 179 yards and two touchdowns and the Cyclones held Missouri on a fourth-and-goal with 21 seconds left to beat the Tigers 21-16 in McCarney's final game at Iowa State.

"We had energy, juice, emotion, passion and toughness," McCarney said. "It's been an extremely long year, and somehow, some way these kids reached down for more. They got more, and they gave more."

The Cyclones (4-8, 1-7 Big 12) snapped a six-game losing streak behind an extraordinary effort from Kock in his final collegiate game. Kock, a fullback who moved to tailback last week in place of injured Stevie Hicks, gained more yards Saturday than he had in his first three seasons.

Kock was named team MVP on Friday despite a quiet season statistically. His 179 yards against Missouri were the most by an Iowa State back since Ennis Haywood had 185 yards rushing at Kansas in 2001.

"He did a marvelous job," McCarney said. "Maybe it sparked him a little more today to go out and be an MVP today, which he was."

Down five with 3:33 left, Missouri (7-4, 3-4) converted a fourth-and-one near midfield, then reached the Iowa State 9 two plays later as Tommy Saunders made leaping grabs of 23 and 17 yards. Chase Daniel reached the one on a scramble, setting up fourth-and-goal with 26 seconds left. 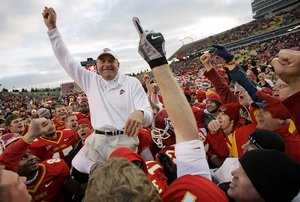 IOWA STATE COACH DAN MCCARNEY IS CARRIED OFF THE FIELD by his players following the Cyclones' game against Missouri.. Iowa State earned a 21-16 victory Saturday in McCarney's final game on the sidelines.

Daniel reached the end zone on the next play, but the Tigers were called for holding and pushed back to the 11. Shawn Moorehead sacked Daniel to end the game.

Missouri coach Gary Pinkel made no secret about how upset he was at the holding call.

"In 30 years I have never seen a holding call inside the two-yard line on a run play," Pinkel said. "We're real disappointed with the call at the end."

Daniel was 29-of-44 for 310 yards for Missouri, which lost for the fourth time in five games.

"We can't argue the (final) call, but we played tough anyways," Daniel said. "No offense to them, but they never should have beaten us."

Iowa State moved ahead 21-10 with touchdowns on its first two possessions of the second half. Missouri jumped offsides with the Cyclones lined up for a field goal, and Iowa State took advantage by converting on fourth down. Kock scored on a one-yard run to give Iowa State its first second-half lead in eight Big 12 games.

The Cyclones pushed their lead to 11 on a 9-yard touchdown run by Kock. Iowa State reached the Missouri 11 with 3:40 left, but Bret Culberson missed a 28-yard field goal that would have given the Cyclones an eight-point lead.

Missouri's Tony Temple answered with a seven-yard TD run early in the fourth quarter, but the Tigers failed on a two-point conversion.

Early on, it looked as though the Tigers would run Iowa State off the field. But the Cyclones held Missouri to just 38 yards of total offense in the second quarter and cut its deficit to 10-7 by the break.

"We wanted it. We were hungry. In the locker room before the game, you could just tell that everybody was excited," wide receiver Milan Moses said. "We went out there and won that for Mac."