By By Chip Brown - The Dallas Morning News

Austin, Texas — With the 323 yards passing given up by Texas in a 45-42 upset loss Saturday at Kansas State, the Longhorns have set a school record for most passing yards allowed in a season (2,739).

A veteran secondary (three seniors and a junior) has struggled with injuries all season but played its best game of the year two weeks ago in a 36-10 win over Oklahoma State. The Cowboys' offense, one of the most explosive in the country, gained just 80 yards rushing and 123 yards passing.

"The biggest thing is we've done a great job of stopping the run, which puts more pressure on our secondary, and a lot of those guys have been hurt," Brown said. "We did a super job with it last week (against Oklahoma State), and we just didn't make the plays this week that we did last week. We've got to continue to look at it." 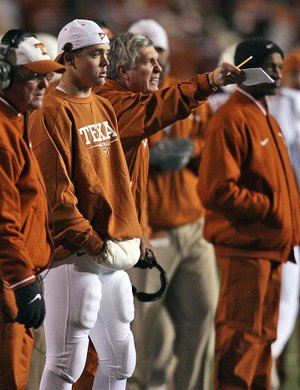 Texas coach Mack Brown gestures from the sideline as injured QB Colt McCoy, wearing cap backwards, looks on from the sideline during the Longhorns' 45-42 loss Saturday to Kansas State. UT's pass-poor defense - and, no doubt, McCoy's injury - played a big part in the defeat.

Cornerback Aaron Ross, who has been the best player in the secondary all season, was lit up repeatedly by K-State wide receiver Yamon Figurs. Figurs set career highs for catches (six) and yards (123), including TD grabs of 36 and 30 yards. With the score 7-7, Ross also dropped an interception that probably would have been a walk-in touchdown.

Brown said the Longhorns "have a lot of work to do" before the Texas A&M game Nov. 24.

Brown defended the performance of quarterback Jevan Snead, who replaced injured Colt McCoy in the first quarter against K-State.

Snead completed 13 of 30 passes, including at least four drops by receivers, and suffered five sacks.

"Jevan did a good job," Brown said. "For his first game, to go in with that pressure on the road, I thought he did an amazing job to still give us a chance to win the game. And the two turnovers we had were not Jevan, so we can't even go there with the turnovers."

Brown was asked if Snead should have played more against Baylor and Oklahoma State.

"(Offensive coordinator) Greg Davis has worked Jevan with the No. 1 offense and No. 1 center every practice," Brown said. "We feel like Jevan was not a difference in that ballgame Saturday night."