Texas regroups during off week

The No. 11 Texas Longhorns were cruising with eight straight wins behind a freshman quarterback who was suddenly included in Heisman Trophy chatter, and another shot at No. 1 Ohio State appeared possible.

Then everything crashed on a cold night in Kansas.

Colt McCoy got hurt, and a bid to be the first repeat national champion since Nebraska in 1995-96 ended with a 45-42 loss at Kansas State.

The Big 12 title is still for the taking, but the Longhorns have work to do, starting with their annual showdown with Texas A&M.

The Longhorns (9-2, 6-1 Big 12) rest this weekend before hosting the reeling Aggies (8-3, 4-3), who dropped out of contention in the Big 12 South with consecutive home losses to Oklahoma and Nebraska.

After 11 straight games, the open date gives Texas a chance to recover and regroup. The Longhorns still must beat the Aggies to win the Big 12 South and get to the conference championship game.

Failing to win the Big 12 a year after winning the national championship would be a huge letdown.

"You can tell the guys have been disappointed. But they understand you've got to move forward and get ready for the Aggies," coach Mack Brown said. "They don't have as much to play for as No. 2 in the country. They do have more to play for than No. 112. They can still be champions." 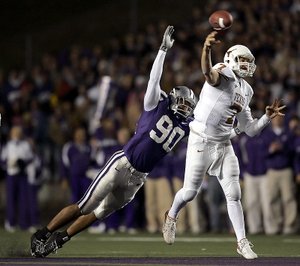 Texas quarterback Jevan Snead (7) throws under pressure from Kansas State defensive end Eric Childs (90). Snead stepped in when Colt McCoy was injured in the first quarter on the Longhorns' 45-42 loss to the Wildcats last Saturday. McCoy said he would be ready for next weekend's game against Texas A&M. The Longhorns must win to clinch the Big 12 South.

Or they can be back in the Holiday Bowl. It will depend on how well McCoy recovers from a shoulder and neck "stinger" and which defense shows up the next two weeks.

McCoy has thrown a school-record 27 touchdown passes but was knocked out of the game on the first drive against Kansas State when he scored a touchdown on a quarterback sneak.

"We learned about Week 3 or 4 Colt was a great leader," Brown said. "Anytime you take a guy out of your team who has taken a lot of snaps, everybody was talking about for the Heisman, it's going to affect you some. What we've got to do is a better job when something goes wrong."

McCoy has said he'd be fine to play against A&M, but Texas usually doesn't release injury information until the day before the game.

"I'm really disappointed I wasn't able to be in there helping my teammates, but I'm going to be fine," McCoy said. "The off week couldn't come at a better time. I'll do everything it takes to get back."

The Longhorns also hope for the return of starting offensive lineman Justin Blalock, who sat out most of the second half against Kansas State with a left knee injury.