Sooners hoping to stay away from late swoon

Norman, Okla. — On the rebound with a five-game winning streak, No. 16 Oklahoma is focused on keeping its momentum and preventing a late-season letdown.

Much like last season, the Sooners (8-2, 5-1) have bounced back from a loss to Texas by putting together a string of wins.

But last season, the Sooners' streak ended in their next-to-last regular season game on a disputed last-second touchdown at Texas Tech.

"What'll matter is can we keep the progress going? Can we keep improving this week? That's what kind of our measuring stick has been with ourself is getting ourself better," coach Bob Stoops said Tuesday. "We've got areas that we're still working on that we feel we can improve, and the players see it plain as day."

The most disappointing area for Stoops was turnovers. The Sooners lost three fumbles against Texas Tech last week, and quarterback Paul Thompson's lone interception was returned for a touchdown.

He was pleased, however, that Thompson bounced back to throw for a career-high 309 yards and restore balance to Oklahoma's offense after a run-dependent outing at Texas A&M. 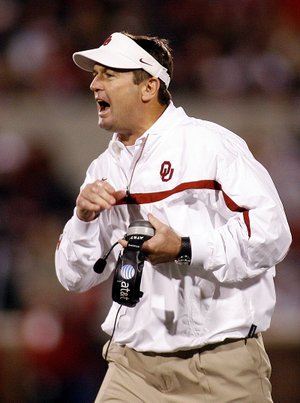 There are some potential distractions. The Bedlam game against Oklahoma State looms next week, and there's a possibility that 2004 Heisman runner-up Adrian Peterson could return from a broken collarbone in time to play.

The Sooners are also still alive in the race for the Big 12 title, although it will take a second straight loss by first-place Texas for that to happen.

"We've got to take care of our stuff. What happens after that, happens," Thompson said.

Answering a question about Peterson's probable return, offensive coordinator Kevin Wilson said the Sooners should be focused on their goals instead.

"I think that's the key for this week is keeping these young guys honed on this team and honed on us and finishing," Wilson said. "Most of these guys have never played this much and played this hard. (We need) to be strong enough and tough enough to finish out as we go down the stretch."

Oklahoma is particularly young on offense, where there are only three players that were starting at their current position at this time last season.

"We've got a young group, and my concern with a young group is young guys that have never played this much at the end of the year, they kind of hit that wall," Wilson said.