Durant a big hit for Texas

New York — Kevin Durant has had a pretty impressive start to his college career. Texas coach Rick Barnes has a different view.

"Kevin hasn't played well yet," Barnes said after the 6-foot-9 swingman scored 29 points to lead the 19th-ranked Longhorns to a 77-76 victory over St. John's on Friday night in the third-place game of the Coaches vs. Cancer Classic. "He is progressing well. In practice he's our best inside scorer, and he has a terrific midcourt game. He is 200 miles from where he was two weeks ago. He's special."

Durant, who had 10 rebounds, has scored at least 20 points in every game for Texas.

"I'm surprised I'm getting so much play," he said. "This is a close-knit group, and they get the ball to me and have a lot of confidence in me."

The one getting the ball to him most is fellow freshman D.J. Augustin. The point guard had 17 points, including Texas' last five of the game, and seven assists.

"It's a huge advantage for Durant to be playing with Augustin," Barnes said.

The Longhorns (3-1) were able to win a close one after losing, 63-61, to Michigan State in the semifinals on a driving basket by Drew Neitzel with 2.4 seconds to play. This time, they weren't assured of the victory until Anthony Mason Jr.'s long three-point attempt with one second left bounced off the rim.

"We made mistakes coming down the stretch," Barnes said, "but the freshmen are fearless. I have confidence in them."

Augustin gave Texas the lead for good at 75-73 with two free throws with 1:55 to play. His driving scoop shot after he stole the ball from Lamont Hamilton made it 77-73, but he missed the free throw to complete the three-point play. 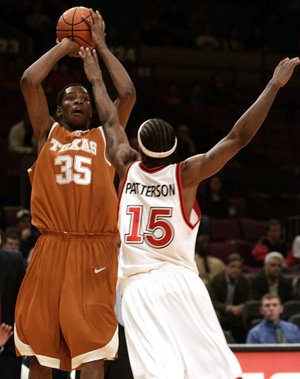 Eugene Lawrence's three-point play with 31 seconds left brought St. John's (2-2) within one point. Justin Mason, another of the freshmen who see extensive time for Texas, missed the front end of a 1-and-1 with 16 seconds left, but all St. John's could manage on its final possession was the long three by Mason.

"We got a good test," Augustin said. "We tried to make plays."

Avery Patterson had 22 points for St. John's and was 6-for-11 from three-point range.

"It was a lot better than last night. We didn't respond to the level of play against Maryland," said Red Storm coach Norm Roberts, a former Kansas University assistant. "I can sleep a lot better tonight than I did last night."

The second half was one of swings for both teams, and Texas had the first one, opening with a 12-0 run as St. John's came up empty on its first eight possessions. Augustin started the run with a driving basket and capped it with a three.

College Station, Texas - Joseph Jones scored 19 points to lead Texas A&M over Lamar in the inaugural Shelby Metcalf Classic. Josh Carter had 14 points and Dominique Kirk and Antanas Kavaliauskas added 12 each for Texas A&M (2-0), which jumped out to a 30-5 lead. A&M had runs of 11-0, to start the game, and 14-2 to pull away in the game's first 10 minutes.

James Davis scored 14 points for Lamar, which shot only 28 percent for the game. Davis had eight points in the last three minutes of the second half to cut into the Aggies' lead.

Stillwater, Okla. - Mario Boggan scored 27 points, and JamesOn Curry added 17 as Oklahoma State beat Texas Southern. Stymied early by a tough zone defense, Oklahoma State didn't find a rhythm until late in the first half. The Cowboys made just 11-of-29 field goals and 5-of-11 three-pointers.

Lubbock, Texas - Jarrius Jackson scored 26 points - including 11 of 12 from the foul line - to lead Texas Tech.

Trailing by nine points at halftime, the Bison scored on four of their first five possessions in the second half to whittle their deficit to three, 45-42.

North Dakota State went up by one point twice, the last time at 59-58 with 11:51 remaining, when Ben Woodside hit a three-pointer and two free throws. Then Tech pulled ahead for good.