One month ago, this may have been a battle of the pipsqueaks - Kansas State's pass offense or Kansas University's pass defense?

Truth is, neither were much to speak of when the Big 12 Conference season began. Both units have since picked up steam, but only one is powering forward like a locomotive heading into Saturday's in-state football game - and it's got a purple tint to it.

Amidst K-State's current three-game winning streak, Freeman has completed 55 of 77 passes for 681 yards and six touchdowns. He's thrown only two interceptions in that stretch and propeled K-State (7-4 overall, 4-3 Big 12 Conference play) from the bowl bubble into a solid post-Christmas matchup to be determined. K-State has scored at least 30 points in each of its last three games, victories over Iowa State, Colorado and No. 4 Texas.

Freeman's makeup gives K-State's passing game the edge against KU's pass defense, which is improved but still not proven to be immune to problems against a precise quarterback.

And believe it or not, Freeman fits that mold. Never mind that he's only 18 years old and was leading Grandview (Mo.) High one year ago. His transition into NCAA Division I-A has been freakishly fast. 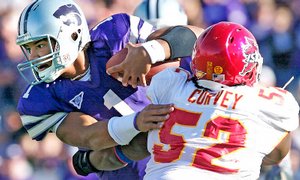 For emphasis, rewind to the beginning of the conference season. During the same stretch that saw KU's pass defense getting torched by teams like Nebraska, Oklahoma State and Baylor, the Wildcats' passing offense was equally dismal. They attempted just 15 passes against Oklahoma State, threw for just 63 yards against Missouri and had three times as many interceptions as touchdowns in their first six games.

Prince benched senior Dylan Meier in favor of Freeman, a hotly contested move that has proven brilliant. And it could be a move that pesters the Jayhawks throughout Saturday's game.

Kansas has calmed down its pass-defense problems the last two weeks, though the opponents were banged up or aerially inept. KU sophomore cornerback Aqib Talib is building an All-America resume, while Anthony Webb is rapidly improving on the other side. Freshman free safety Darrell Stuckey has enough experience to be getting comfortable, as is a linebacker corps that was much more mistake-prone a month ago.

The game is slowing down for KU's pass defense, no doubt. But K-State's passing game might have the weapons to hit the fast-forward button for about three more hours this weekend.

And who would've thought as much just one month ago?

KU Jayhawks? Who are they? GO WILDCATS!!

Man, that's pretty bold for a K-State fan. Coming onto a Jayhawk website and talking sh**. All I've ever thought K-State fans to be were Purple Pussies. Hehehe Go Hawks!!! Put Freeman on the turf!!!!

This will be a great test of how far the KU defense (pass defense that is) has come in the last three weeks.