New York — Drew Neitzel scored on a drive with 2.4 seconds left to give Michigan State a 63-61 victory over No. 19 Texas on Thursday night in the semifinals of the Coaches vs. Cancer Classic.

Neitzel, the only junior in the Spartans' starting lineup with two sophomores and two freshmen, took an inbounds with 8.4 seconds left. He dribbled behind the three-point line, where both teams seemed to be taking the majority of their shots, put the ball on the floor and drove right down the lane for the winning points.

Texas called a timeout and had a final chance, but A.J. Abrams' long shot from a step inside halfcourt bounced off the rim.

Michigan State (4-0) will play Maryland for the championship tonight at Madison Square Garden. The Terrapins (4-0) beat St. John's 92-60 in the other semifinal.

In a game of two young teams, freshmen were key for both.

Raymar Morgan had 18 points for Michigan State, while Kevin Durant had 21 for the Longhorns (2-1), one less than Abrams, a sophomore. 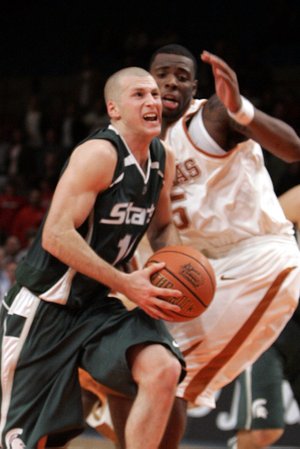 The Spartans used a 12-0 run - nine of the points coming on threes - to take a 54-47 lead. Abrams hit consecutive shots from behind the arc to get the Longhorns within one.

Abrams hit his last three of the game with 5:26 left to pull the Longhorns within 59-58 and Durant made one free throw with 4:02 left to tie the game.

Abrams made two free throws with 2:48 left to tie the game for the last time at 61, and there were five missed shots and five timeouts before Neitzel came up with the winning play.

Columbia, Mo. - Freshman Keon Lawrence had 17 points and three assists off the bench, helping Missouri beat Lipscomb to give new coach Mike Anderson a 4-0 start. Marshall Brown added 15 points and Darryl Butterfield had 11 for the Tigers, 4-0 for the first time since 2002-03 and coming off consecutive losing seasons.

Norman, Okla. - Longar Longar scored 21 points, and freshman Tony Crocker added 18 as Oklahoma beat Liberty. The Sooners (2-0) pulled away with a 21-2 run in the first half that Crocker started with nine straight points.