Burlington — So, Kansas University coach Bill Self phones you at 8 p.m. Tuesday to offer you a basketball scholarship. How do you celebrate?

The industrious Reed, a 6-foot-3, 180-pound guard from Burlington High, signed his letter of intent Wednesday afternoon in front of several of his classmates gathered in the school's gymnasium. Reed, who received more than 50 Division I offers, chose KU over Stanford, Missouri, Missouri State and Oklahoma. KU attracted him because of its 75-mile distance from Burlington and basketball tradition.

"It's close to home," Reed said. "Kansas is so good in basketball and always has been."

A Jayhawks fan growing up, Reed attended KU basketball camps since the age of 6. His sister, Lacie, is a freshman at KU.

Self will receive a combo guard who can handle the ball and shoot the mid-range to outside jumper. Stacy Reed, Tyrel's father and the Burlington head coach, said Tyrel averaged 23 points, six assists, six or seven rebounds and five steals last year and shot better than 45 percent from three-point range during each year of high school.

"Whether you want to label him as point or not," the elder Reed said, "he can score."

A slightly-built guard, Reed could add bulk, but he has greater speed and quickness than his appearance suggests. 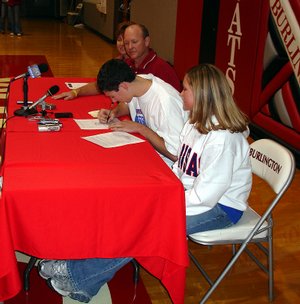 Tyrel Reed, a 6-foot-3 guard from Burlington High, signs his national letter of intent with Kansas University. Reed officially joined the Jayhawks at a signing ceremony on Nov. 15, 2006, at his high school.

"He's a lot more athletic than people think," Stacy Reed said. "His athleticism has gone through the roof from where it was three or four years ago."

A Rivals.com representative who attended Wednesday's signing dubbed Reed as the 99th-best player in the '07 class, but several media outlets expected Reed to wait until the spring to announce his decision. Self even told Reed he would hold a scholarship for him. But by signing early, he can enjoy his senior year with one less burden on his mind.

"It's nice to get it done before the season," Reed said, "and just go out and play."

Reed also considered North Carolina, largely because of his fondness for coach Roy Williams. The Tar Heels, however, would have forced him to wait until the spring. Stacy Reed said Roy Williams liked his son but targeted big men in the '07 class.

Moreover, Williams likely wanted to see whether some of his current guards leaned toward entering the NBA and pursue other highly ranked recruits before offering Reed a scholarship.

"North Carolina was in, and they would've been a possibility if it went into the spring," Stacy Reed said. "It came down to how they could fit him in."

Reed becomes the second commitment from the Class of '07, joining Cole Aldrich. Reed and Aldrich attended Late Night in the Phog at Allen Fieldhouse together and remain close.

The Kansas native planned to call his future teammate Wednesday.

"I'm sure I will sooner or later today," Reed said. "Cole's a nice guy. He's really fun, and who knows? He may be my roommate next year. It'll be cool."

While selecting a college to attend represents a major decision in any high school senior's life, Reed went with his heart.

"It came down to KU being my favorite," he said. " I wanted to be a Jayhawk."

Still remains to be seen, whether Reed will fit into KU offense. If he continues to develop, he should be a contributor. He could be a good RS candidate.

"He could be a good RS candidate."

And you are judging this from what criteria or game?

Hey well yea I just wanted everyone to know that im pretty sure that he is going to be a very good player and will improve a lot between now, and playing with ku. Im sure that he will add something to the team, also I go to school with him and watch just about all the games and he is a very strong competitor.

not the best recruiting this year except Cole Adrich

Hey..Maybe you should watch him play before you judge him because more than likely you will change your mind about him!