It has been more than two years since any one player has done it. Kansas University's football team will be going for consecutive game number 24 on Saturday, while Kansas State looks to smash the streak with some young legs.

Nov. 13, 2004, was the last time KU allowed a 100-yard rusher in a game. On that day, Texas stars Cedric Benson (161) and Vince Young (114) both did it, leading the Longhorns to a controversial 27-23 victory that exploded with some certain postgame comments by KU coach Mark Mangino.

Since then, KU has faced some ground-game studs - and none could crack the 100-yard barrier. It's believed to be the longest streak going in NCAA Division I-A and could be evidence as to why Kansas' run defense holds the edge against K-State's rush offense when the two face off Saturday at Memorial Stadium.

Kansas State started the season with senior Thomas Clayton (16 carries, 13 yards against KU last year) before benching the veteran and going young. Explosive freshman Leon Patton and junior-college transfer James Johnson have taken over, combining to give the Wildcats a respectable ground game. 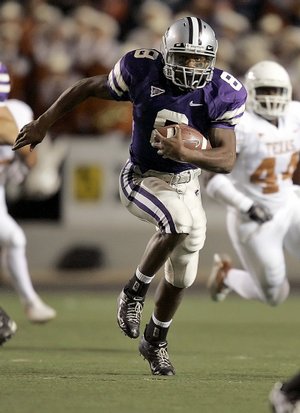 Kansas State running back James Johnson runs against Texas in the Wildcats' stunning victory. If the Jayhawks play true to form, Johnson could have a tough time on the ground Saturday against the Kansas University defense.

But barring a 50-plus yard scamper by Patton or Johnson, expect KU's impressive streak to continue. Though pass rush has struggled at times this year, plugging gaps and stopping the run game has been solid going on two seasons now. Performances by Clayton, Young (in 2005), Nebraska's Cory Ross, Houston's Ryan Gilbert, Colorado's Hugh Charles and Iowa State's Stevie Hicks - to name a few - are proof.

The Wildcats, meanwhile, rank ninth in the Big 12 with only 122.5 rushing yards per game. The passing attack, led by freshman quarterback Josh Freeman, has negated it. But the balance that many college football programs crave isn't so 50-50 at Kansas State recently.

Not that it's mattered, as the Wildcats have won three straight and done it by piling on points. But if establishing the run and controlling the clock was K-State's game plan going into Saturday's showdown, it might find the same thing most of KU's opponents have realized the last two years - moving the chains against Kansas isn't done effectively by running the football.

Question. The football schedule says the K-State game is at 2:30 Saturday. The "Next Game" section of the web page says 7 p.m. Which is it???

I know, Ive been searching all over!!! I hope this means that maybe it will be on tv, why else would a game this late be at 7???

The game is at 2:30 and is televised on Fox Sports Net

Well, Fox Sports Network has our game on their TV listings for 2:30 Saturday, so I assume that's right. KUSports should correct their web page or explain the change.

Any true KU fan within sixty miles of Memorial Stadium will be at the game and the only reason they would worry about television is if they are taping it to watch it later. I understand if you stay home for some Oral Roberts game in Allen Fieldhouse but not for this. An entire season comes down to one game.