LUBBOCK, TEX. — Texas Tech coach Bob Knight says there were times he was wrong when his hot temper got the best of him on a basketball court. Not this time, however.

This time, everyone from the player he confronted to the player's mother and school officials say what Knight did was no big deal.

It all started Monday night when Knight went after Michael Prince, forcefully pushing his chin upward and telling him to look him in the eye, during a timeout late in the Red Raiders' 86-74 victory over Gardner-Webb.

Athletic director Gerald Myers defended Knight on Tuesday, saying he did nothing wrong when he "quickly lifted" Prince's chin. The president of the school's faculty senate, James H. Smith, said Knight's action was not "physical abuse or violence."

Knight, with a history of chair-throwing, referee baiting and run-ins with school officials, was not available for comment to the Associated Press before Tuesday night's home game against Arkansas-Little Rock.

"I'm sure there were some cases where I have been wrong, but (Monday night) wasn't one of them," Knight told ESPN.com. "I was trying to help a kid, and I think I did.

Prince told the Lubbock Avalanche-Journal after Monday's game that what happened with the coach "was nothing." 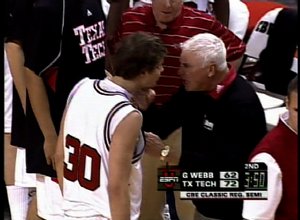 "He was trying to teach me and I had my head down, so he raised my chin up," said Prince, who was seen moving his jaw around as he sat on the bench after the confrontation. "He was telling me to go out there and don't be afraid to make mistakes. He said I was being too hard on myself."

Prince's mother, Suzette Prince, told the Avalanche-Journal that she was sitting with her husband, Mike, across from the Tech bench. She said she didn't think this episode should be an issue.

"We talked with Michael, and he had just committed two fouls in a row," she said. "He told us that Coach Knight was asking him if he's ready to play. He said they needed him ready to play."

She said she didn't think Knight should be reprimanded, and the school made no reference to disciplinary action against Knight.

"Coach Knight did not slap Michael," Myers said in a statement. "Michael came off the court with his head down, and coach Knight quickly lifted Michael's chin and said, 'Hold your head up and don't worry about your mistakes. Just play the game."'

Knight gave a brief statement at the postgame news conference Monday, then answered one question before exiting the room. He did not address what happened with Prince.