Self not worried about potential cover jinx

Bill Self, who is as superstitious as the next coach, winced when informed his Kansas University basketball team was Sports Illustrated's Preseason No. 1 squad in the land.

"I was like, 'No, don't do that,'" Self chuckled Tuesday night, hours before S.I.'s college basketball preview issue hit the newsstands with Julian Wright and Mario Chalmers gracing one of five regional covers.

"In all honesty, though, it's fine. I think it's cool. It's great publicity."

But is there S.I.'s fabled jinx to worry about?

"I hope not," said Self, whose Jayhawks are ranked ahead of Florida and North Carolina. "I asked them if they've ever had a team on the cover that ended up winning it all, and they said positively."

Self addressed the Sports Illustrated issue with his Jayhawks before Tuesday's practice.

"I told our guys, 'This is a national deal. They wouldn't put you on there unless you were a national player. But are we working like a team that is a national player?'" Self asked. "We've got a lot of work to do if we want to live up to the things that people are saying about us."

This marks the third time KU has been on the Sports Illustrated College Basketball Preview cover. The others were 1995-96 (Jacque Vaughn) and 1996-97 (Paul Pierce).

"I've slapped 'em (players) on the butt harder," Self said with a smile. "There's a congratulatory butt slap, and there's, 'I'm mad at you' butt slap. If you want to get real technical about it, I guess every coach has done something like that." 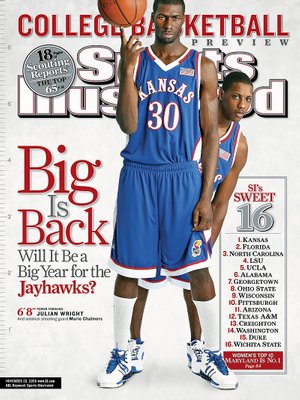 Self said it was probably a good idea to have a hands-off-the-players policy in regard to coaching.

"You shouldn't (touch a player)," Self said. "There's been times a guy has not been in the right spot. You take him, grab him and pull him over there. You've got to be real careful about that. Times are different. This is a different time than it was 20 years ago.

"Twenty years ago, what happened yesterday wouldn't even be talked about. It is kind of how we were raised."

Both Tech's Prince and Prince's parents said they had no problem with Knight forcibly raising their son's chin. Tech's school president also has said Knight will not be disciplined for Monday's incident.

"Obviously, anything he does will be a big story, moreso this year," Self said of Knight, who is nine wins shy of surpassing Dean Smith for most all-time coaching victories. "I certainly hope this does not take away from what his team and he will do this year in breaking the record."

¢ Chalmers to start: KU sophomore guard Mario Chalmers, who has been battling a sprained big toe on his left foot, will start tonight, Self indicated.

"It's great now, almost 100 percent," Chalmers said. "The blister is closing. It feels a lot better."

Chalmers said the toe "hurt a little sometimes," in Saturday's season-opening win over Northern Arizona. "You've got to fight through the pain."

Northern Arizona, by the way, bounced back to beat Arizona State, 75-71, on Monday and plays Arizona tonight in Tucson, Ariz.

¢ Case still out: Junior guard Jeremy Case is doubtful tonight because of a pulled groin that has forced him to miss two exhibition games and one regular-season contest.

"I don't think he'll be able to go," Self said of Case, who was running and shooting under the supervision of a trainer before Tuesday's practice.

¢ Kaun recovering: Sasha Kaun, who has been out two weeks because of a partially torn patellar tendon in his right knee, shot on the side Tuesday.

"I feel great," Kaun said. "Hopefully, I'll return to do some practice stuff this week and see how it feels."

Kaun doesn't know if he'll be able to play against Florida a week from Saturday.

"It would be disappointing (if unable to play), but the season is pretty long. I'd rather be playing at the end of the season and help the team when the Big 12 comes around rather than play in early games to make it worse," Kaun said.

Kaun said he had been "doing a little bit of jogging and running on the treadmill, different exercises and defensive slides. I've not been able to jump. There is no pain. It kind of gets sore and stuff. When I get sore, they stop me. We don't try to overdo it and make it worse."

It has worked out well for the 6-8 Green, the school's No. 6 all-time leading scorer.

"He has a lot of moves on the block," noted fourth-year KU guard Case of McAlester High. He played against Green in Oklahoma's all-state prep all-star game. "He's a lot like (Jeremiah) Massey from K-State. He can get fouled and cause people to make dumb fouls on him."

"I used to watch him when he played in high school. He plays hard. I like the way he hustles, the way he plays," Jackson said.

I like the idea of being number 1. That will put the kind of pressure on this team to stay focused. Forget the SI jinx. Just have coach put a copy on the board before each game and remind this team of what's expected of them. This is a blessing, for coach will use it to his advantage I'm sure.

What a good looking cover shot. KU looks like we mean business in that shot!

The Noodle and Chalmers... funny pic too.

Where's BRush? Or some of our other size in that image? No Kaun? No DJackson?

Great cover!!!! I work in a house full of Cowboys, Red Raiders, and Cats. Football season is rough, but when they saw the S I cover, all they could do was pay homage to the Hawk in my office.

The whole jinx thing is just dumb. We shot a "Regional" cover. Which to the people that get sports Illustrated in other places means they probably have Florida, North Carolina, or Ohio State on the cover. I think It was a lot more of an honor to get the cover before they started doing the regional cover stuff. But still very cool.

Yeah, if you want to see all the covers, go to SI.com and drill into their 'College Basketball' section.

At least C.J. Giles wasn't in the picture.

C.J. was never in the picture since the start of workouts. We all know now his lens was foggy!