Self: Tonight’s game not emotional

"Trust me, it won't be emotional for me from that standpoint at all," said fourth-year KU coach Self. His first head coaching job came at the Tulsa, Okla., school where he compiled a 55-54 record from 1993-97.

"I loved my time there. Oral Roberts has great, great people who gave me my first chance. They jump-started my career. I'll be forever indebted to them. (But) the last time we played 'em, they beat us. They got us at the end."

Oral Roberts' Nathan Binum hit a 21-footer right before the buzzer, lifting the Golden Eagles to a stunning 60-59 victory over Self's third Tulsa team Dec. 11, 1999. That Tulsa squad went 32-5, falling three times to Fresno State, once to ORU and in the Elite Eight - on another last-second shot - versus North Carolina.

"Binum hit a tough shot. He came off a couple screens. The ball bounced around on the rim and fell through," recalled eighth-year ORU head coach Scott Sutton, son of former Oklahoma State coach Eddie Sutton. "It's was exciting for us, not for coach (Self) or the Golden Hurricane," added Sutton, who played at Oklahoma State when Self was an assistant and moved on to join Self's ORU staff for the 1995-96 and '96-97 seasons. "Still, I've heard coach (Self) say that game helped his team. It opened some of their kids' eyes. From that point on, they were a fantastic team." 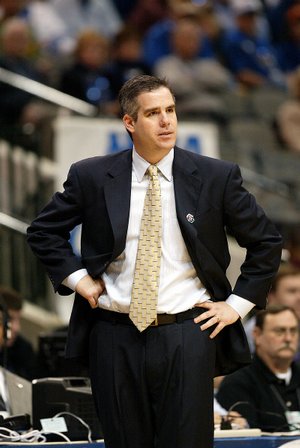 Sutton and his former boss remain close - "we probably talk four or five times a year on the phone and see each other on the recruiting trail," Sutton said - their relationship one of the main reason's tonight's game was scheduled.

"Scott told me one thing Caleb wanted to do before he left college was the opportunity to play at Allen Fieldhouse," Self said of Caleb Green, a 6-foot-8 Tulsa native who enters the season sixth leading scorer in school history. "I think it's a great opportunity for him and their entire team. Caleb is one of the favorites for the Naismith Award. If you pick the top 50 players in the country, he's not between 40 and 50, he's one of the best. It will be a challenge to guard him."

"Being a senior and having the type of career he's had, I tried to do everything to make that possible. Coach agreed to play us," Sutton said.

The Golden Eagles, who are coming off a 21-12 season, dropped their season-opener, 68-65, Friday at Loyola Marymount despite 26 points from Tutt and 12 points and 12 boards from Green. 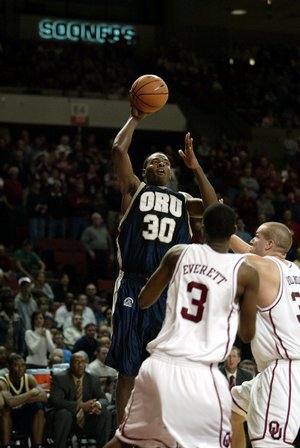 Caleb Green is expected to provide the bulk of the Eagles' scoring punch this season.

"We didn't do a good job attacking. We missed some easy and wide-open shots," Sutton said. "I like our guys. I think we'll have a good team in time. We have two really good players in Green and Tutt and feel the players surrounding them are talented and athletic."

"Oral Roberts is much more athletic than Northern Arizona, and they've got the big load inside," Self said of Green. His Jayhawks waxed the Lumberjacks, 91-57, in last Saturday's season opener.

"We are playing a team in all honesty better than Northern Arizona. They can score and have guys who can get you in foul trouble. It'll be a tough matchup. They create different strategies and different principles we'll have to use. We need to guard well. They can score."

Sutton says the same thing about the No. 3-ranked Jayhawks.

"I think they are the most talented team I've seen in a long time. I thought Memphis was really talented last year. After we played them (94-78 loss in NCAA Tournament) I said I thought Memphis had the best team we played in 11 years at ORU. Kansas has a chance to be better than that this year.

"They have so many weapons, it's hard to take away any one or two players. I love their freshmen, who will be unbelievable players, and everybody knows (Julian) Wright, (Brandon) Rush, (Mario) Chalmers. It wouldn't shock me if they go on and win the whole thing. They are that talented. Of course, it's a long long season and anything can happen."

Yep anything can happen in college basketball ... to Self's chagrin back in '99.

We are too talented this year for "anything to happen" this time around.

It better not. The Boys-in-Blue better stay focused and not look past our next couple of opponents as they prep for Florida.

ORU is the real deal. Treat 'em as such and wax the floor with 'em. Make every team dread playing in the Fieldhouse. No mercy! Two teams enter, one team leaves!

I don't want to see another "Richmond" or "Ball State."

JayCeph is right ORU is the real deal. Coach Self made them beleive it when he was there and that attitude hasn't changed. I watched him with ORU, he had great passion for the players and his team then and it has only gotten better. Go HAWKS.

We have to protect our house!!

Interesting information in the article that Self's problems in getting beat in early rounds of the NCAA were not just here....

Gihawk, Is the elite eight an early round? Generally a mid major getting beat on a last second shot by UNC would garner talk of coach of the year. obivously you were baiting and I took it but.... What a moron

Need some good excuses for the Bucknell loss.... Langford was hurt, bitter team that lost their coach, Simien was always hurt, but yeah, other than that no good excuses... This is his team now and Florida is gonna get creamed, as long as Kansas plays defense..

The Bucknell game was two years removed from losing that one coach. The year before (when the wound was still fresh) KU made it all the way to the elite eight under their new coach in his first year with the squad.

There is no excuse for the Bucknell game.

I was a Roy fan, till he left and now he can bite me. Took me a while to warm to Bill but it seems pretty clear he has the confidence and attention of his players, assistant coaches, and staff; those that deal with him on a near daily level. As long as that remains the case and he continues to remove players from the team who can't control themselves off the court, I will be a Bill Self fan. This will be a fun game to watch! GO HAWKS!

what's a good on-line radio station to tap into to listen to hawk games? hard to find here in iowa.

well, I'm in NE and I just listen to the Jayhawk All-Access broadcast. You have to sign up for it, (6.95/mo.) but it's worth it. You can listen to all the games and sometimes they stream them as well.

Maybe if 'Coach' Self would GET emotional about games, actually CARE if we win or lose, we wouldn't lose in the Fieldhouse..

NOT ONE KU FAN SHOULD EXPECT SELF TO EVER DO ANYTHING SIGNIFICANT AT KU BESIDES SIGN THE BEST PLAYERS. SELF COULDN'T COACH THE MIAMI HEAT TO AN NCAA TITLE IF GIVEN THE CHANCE! ANYBODY WHO EXPECTS KU TO GET OUT OF THE FIRST ROUND OF THE NCAA TOURNAMENT IS LIVING A DREAM!

The best players won't want to play for Self if he just wastes their talent. It's about results and winning games. We didn't have any need for a "wake-up call" this early