Albuquerque, N.M. — J.R. Giddens scored a career-high 25 points, and New Mexico got a huge first half lift from its bench in a 106-65 victory over Colorado on Tuesday night.

Giddens, the former Kansas University guard who sat out last season after transferring to New Mexico, shook off a slow start and dissected the Buffaloes' defense with his quickness, slashing moves to the basket and outside jumper that repeatedly found the hoop.

New Mexico (3-0) took its first lead at 15-14 on a pair of free throws by Jeffrey Henfield with 11:46 left in the first half. New Mexico's reserves, who scored 25 points in the first half, and some solid free throw shooting, carried the Lobos' offense until Giddens found his stroke.

The Lobos hit their first 13 free throws and reserves Daniel Faris, Chad Toppert and Ryan Kersten provided much of the offense in the first 20 minutes.

Toppert hit a trio of three-pointers in the first half, Faris scored eight points and Kersten six. Toppert's back-to-back threes gave the Lobos a 36-25 lead with 5:02 left in the first half.

Giddens, a junior who New Mexico coach Ritchie McKay has tapped a likely lottery pick in next summer's NBA draft, flexed his muscles to the crowd of more than 12,000 after the dunk. 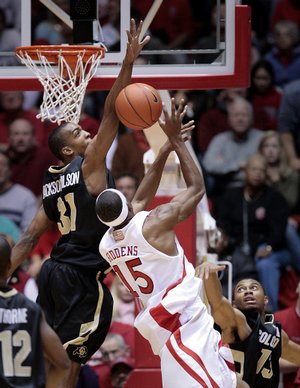 Colorado's Jermyl Jackson-Wilson (31) tries to block a shot by New Mexico's J.R. Giddens (15) as Colorado's Xavier Silas defends. GIddens, a former Kansas University player, had a career-high 25 points in UNM's victory over the Buffaloes on Tuesday in Albuquerque, N.M.

Lubbock, Texas - Bob Knight passed along a couple of love taps - these clearly in jest - during Texas Tech's victory over Arkansas-Little Rock. A day after Knight forcefully lifted up a player's chin on the sideline, the volatile coach poked fun at himself. Knight patted Darryl Dora on the back of the head and gave him two light swats on the behind as the senior jogged from the bench to the foul line late in the first half. The crowd roared its approval, and Dora made both free throws.

Near the end of the game, Knight also gave Michael Prince - the player Knight confronted Monday night - a gentle pat on the behind. Fans responded with light applause.

Tech (3-0) never trailed and beat the Trojans (2-1) in the regional final of the College Basketball Experience Classic. The Red Raiders advanced to play No. 16 Marquette in Monday's semifinal at Kansas City.

Lincoln, Neb. - Aleks Maric, whose appendix was removed 11 days ago, had 29 points and 10 rebounds to lead Nebraska in Doc Sadler's regular-season debut as the Cornhuskers' head coach.

well... what does one say about that?