Catamounts get another signature win

Boston — The Vermont basketball program already has its signature moment: a victory over No. 11 Syracuse in the 2005 NCAA Tournament that was the school's first-ever win over a ranked team.

The Catamounts added a second victim to that list on Monday night, coasting to a 77-63 victory over No. 14 Boston College thanks largely to a couple of players who weren't around for that first-round NCAA win.

"They did something we're trying to do now," said sophomore Mike Trimboli, who had 17 points, eight assists and six rebounds before sending a scare into his team when leg cramps dropped him to the court in the final seconds. "This win was big for our program."

Freshman Joe Trapani had 13 points and eight rebounds, most in the first half while the Catamounts (2-1) built a 17-point lead, while Chris Holm added 15 points and 10 rebounds. The Vermont players started clapping on the court in the final minutes, although Trimboli's injury with 19 seconds left dampened the mood.

The Vermont guard crumpled to the floor near midcourt and limped off, favoring his right leg, after being helped by a trainer. He was smiling after the game, though, and coach Mike Lonergan said it was just a cramp. 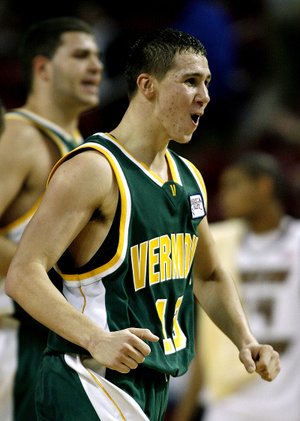 Vermont's Mike Trimboli celebrates during the second half of a 77-63 victory over No. 14 Boston College. Trimboli led Vermont with 17 points Monday in Boston.

"He should be OK," said Lonergan, who took over when the wacky and winning Tom Brennan retired after the 2005 tournament.

"Coach Brennan and the players put Vermont on the map," Lonergan said. "We're just trying to stay there."

Jared Dudley had 19 points and 14 rebounds for BC, but had just two field goals in the second half. The Eagles (1-1) shot 27 percent in the first half and 30 percent for the game and, with starting center Sean Williams serving the second game of a two-game suspension, were outrebounded 48-39.

"The better team won. They clearly outplayed us in every phase of the game," Dudley said. "The question is how you bounce back. It's a learning process. It's all about how you learn from this.

Durham, N.C. - Josh McRoberts and DeMarcus Nelson each scored 16 points to lead Duke past Georgia Southern in the second round of the CBE Classic. Freshman Gerald Henderson added 13 points for the Blue Devils (2-0), who won the tournament's Durham Regional and advanced to next week's semifinals of the 16-team tournament in Kansas City, Mo.

Milwaukee - Dominic James scored 17 points, and Jerel McNeal added 13 to help Marquette escape with an overtime victory in a first-round game of the CBE Classic.

Omaha, Neb. - Anthony Tolliver and Nick Porter scored 14 points apiece to help Creighton its 10th straight win in a season opener, each of the last seven by 20 points or more. Nate Funk finished with 13 points for Creighton.

Nashville, Tenn. - Chris Lofton scored 30 points, and Tennessee survived a sloppy game to beat Fordham in the opening round of the NIT Season Tip-off.