Dynamic backfield duo plus for KU

Lowdown on the Showdown

The option read has been noticeably efficient for Kansas University's football team this season.

Big and fast KU quarterback Kerry Meier often takes the snap and sticks the ball in running back Jon Cornish's gut. Based on what Meier recognizes from the opposing defense before the snap or as the play starts to unfold, he then chooses to keep it in Cornish's possession or rip it away, swing out and run it himself.

Not to say this is an easy argument. But if Meier and Cornish are clicking with the read, and Cornish is clicking period, this is a matchup that should favor Kansas.

"It's always important to establish a run game," KU coach Mark Mangino said. "I think it's a basis for offense, and it allows you to open up the pass game."

Cornish likely has All-Big 12 Conference honors locked up by now, having rushed for a league-best 1,130 yards this season. He's the first Jayhawk to rush for 1,000 yards in 10 years and may make a run at Tony Sands' school record of 1,442 yards. 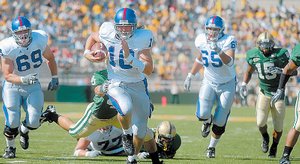 Kansas University quarterback Kerry Meier (10) takes off downfield, leaving his teammates and Baylor defenders in his dust during their game earlier this fall at Floyd Casey Stadium in Waco, Texas. Meier's ability to operate the option read should give the KU offense a distinct advantage against the Kansas State defense during Saturday's Sunflower Showdown at Memorial Stadium

Though other backfield weapons occasionally pop up at Kansas - freshman Jake Sharp averages 6.1 yards per rush in limited action, and fullback Brandon McAnderson has five rushing touchdowns this season - Cornish's main partner in crime running the football has been Meier, a surprisingly quick quarterback for being 6-foot-3 and 210 pounds.

Meier has 297 yards rushing in six games - a number even more impressive considering his rushing total suffers from the 14 times he's been sacked this season.

Having to respect both usually leads to both having respectable games. Baylor, for one, had loads of problems with the Meier-Cornish combo. Before Meier was sidelined at the end of the third quarter with a shoulder injury, he had rushed for 62 yards on 12 carries. Cornish, meanwhile, finished with 196 yards on 24 rushes. 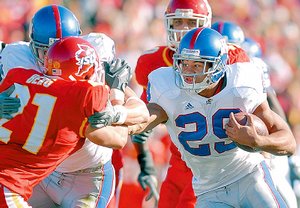 Kansas University running back Jon Cornish tries to cut through a hole against Iowa State. Cornish already has eclipsed the 1,000-yard barrier this season and has a shot at breaking Tony Sands' school record for most rushing yards in a season.

Meier's ability doesn't stop there. He had 70 yards rushing against Oklahoma State, 59 yards against Northwestern State and 57 against Toledo. He's been held under 30 yards only once in the six games he was healthy enough to play in.

Both Cornish (17 carries, 89 yards) and Meier (14-19) were held under their average against Iowa State, a team with a porous defense at best. It proves that stopping the two can be done. But on paper, Kansas has a better chance at succeeding against Kansas State than it does failing in the ground-game department.

That's a nice article, getting us all revved up for the game but while we might have a slight edge in rush offense, I'm going to have to say that the power kitties have a sizeable advantage in their pass offense vs. our porous pass defense.

The way they exploited Texas last weekend is cause for concern. This is especially true when you consider we made Baylor's quarterback look like a first round draft pick.

Memo to the writer of this article, and to others at the Journal World. While we are known as "KU", using "Kansas University" is annoying as he!!, and makes you look like an idiot. Please use "KU" or "The University of Kansas". "Kansas University" is NOT the proper way to refer to the university. You'd think the hometown paper would be aware of this. This is getting old, and its embarassing.

What kind of idiot cares about how you refer to a university in a sports article? Does anyone not understatd what university he is refering to? OPjayhawk, you a dork and obviously easily annoyed. Don't get on here and be a smug prick, go back to the San Francisco side of Overland park Go Kansas University!!!

for real, this article is about the football game, not how to same the name of the school.

I concur with OPJayhawk ... the university's official title is "The University of Kansas" it is the LJWorld who is pretentious ... Kentucky, while UK, is actually Kentucky University. So both K schools are a bit off.

That said, I grew sicker and sicker watching KSU slice and dice Texas last weekend. Especially after having witnessed first hand what the Okie St and Baylor QBs did to the KU defense.

I can only hope that the Mildcats are going to have a big letdown and that Cornish and Meier will run right through them.

Being from the Eastern part of the USA, I like the name the University of Kansas.

I agree with both sides, sort of. It DOES bother me when I see Kansas University; it just feels weird. And it DEFINITELY should not be coming from the Lawrence newspaper. On the other hand, it's a fairly trivial thing--compared, of course, to the earthshaking importance of sports.

Are these people serious? Do they really get upset about how how the university is described? Well then lets look at how much more paper and ink you have to use when they write The University of Kansas versus Kansas university... Aren't university's supposed to be all tree hugger like and enviromental friendly? Please put dots in between K and U so we know its initials for a university. Or to make everyone happy lets change our initials to T.U.o.K. The University of Kansas... Go T.U.o.K!!!!!!!!! Its kinda catchey... Oh yeah don't forget about the football game on Sat..

Just remember to show up on Saturday and make some NOISE for the Hawks to win so we have something FUN to write about next week. That and the fact that I don't want to lose the bet and have to wear purple for the second straight year. That pretty much sucked. GO HAWKS!!

Leave it to some of my fellow Jayhawks to take an article about football and turn it into a debate over how to represent our University in print. Just another example of how lame most KU 'football fans' are. Ya'll make me ashamed to be a football bird. You're probably the same ones that call in to the weekly radio show and ask questions like, "what goes into your decision to wear red or blue shirts at home games?". We're the worst home football fans in the Big XII because of idots like you ... oh, check that, you don't go to games. You just read and post about them online.

Haven't missed a home game in 17 years (and I'm going to Columbia next ) week - prefer the proper name "The University of Kansas" The UDK gets it right, why not the LJW? Whew Now I can focus on the game.

YOU GUYS NEED TO GET A LIFE! ARE YOU SERIOUS? GO HAWKS ! THUMP K-STATE !

You all are wrong...KU is going down on Saturday, enough said!