Naismith memorabilia to be sold

Whistle used at KU among items to be auctioned next month 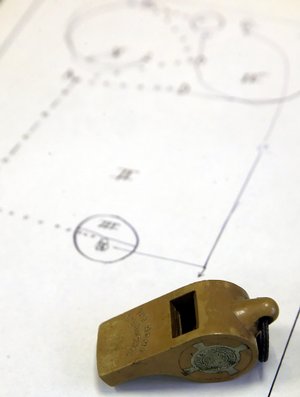 An Acme Thunderer whistle and hand-drawn diagrams are a few items in the collection of basketball founder James Naismith memorabilia. The collection will be up for auction in December.

Clayton, Mo. — It's settled. Basketball really did evolve from a childhood game called "Duck on a Rock."

Such are the revelations contained in a newly unearthed trove of personal documents, photographs and mementos from basketball's founder, James Naismith.

The items, including handwritten diaries and typed notes, were discovered last spring, when Naismith's granddaughter, Hellen Carpenter, went down to her basement to find an old family photograph.

Instead, Carpenter found journals, keepsakes and typewritten rule sheets that open a new window on the birth of one of the world's most popular sports.

Carpenter is auctioning off the documents in December. She said they settle details about her grandfather's invention, such as the "Eureka" moment when he remembered rules from Duck on a Rock, a Canadian game he played as a child, and applied them to his new game.

The five boxes of documents, photos and items were handed down to Carpenter from her mother, Hellen Naismith Dodd, Carpenter said. She kept them around for decades without looking through them.

"My mother told me for years that there was nothing of real value there," said Carpenter, 74.