Rush, the Jayhawks' first-team preseason All-American who had the ball in his hands on KU's first two possessions against Northern Arizona, elected, unselfishly, to get a certain teammate involved instead.

Rush fed junior big man Darnell Jackson first for an inside hoop, next a driving dunk down the lane, making sure the 6-foot-9, 250-pounder picked up where he left off during a solid exhibition campaign.

"I thought it was a good start for Darnell. It was a big confidence boost (for him). It led to the rest of the game him playing really well," Rush said after watching Jackson score 12 points and grab eight rebounds in the Jayhawks' 91-57 victory over the Lumberjacks in Allen Fieldhouse.

Jackson, who hit five of seven shots and two of three free throws in 22 minutes, pointed in the direction of Rush after each of his game-opening hoops.

"It didn't help my confidence. I think it helped the whole team when Brandon threw the ball inside. It gave us a big boost, showed we came out ready to play," Jackson said.

Jackson - who averaged 14.5 points and 8.5 boards in the Jayhawks' exhibition season - said he wasn't trying to make a statement that he'd fare just as well in games that count in the standings. 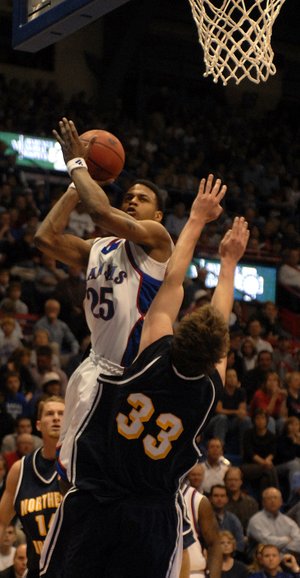 "It doesn't really matter how well I played," Jackson said. "The whole team played well together. If the guards didn't give me the ball, I couldn't score down low. We got some shots down low thanks to the guards."

Jackson said he wasn't focused on how many points he scored.

Rush finished with four assists in 27 minutes. He hit nine of 14 shots, including two of three threes, as well as one of two free throws. He also played strong defense on Northern Arizona sharpshooter Steve Sir, who had nine points off 3-of-5 three-point shooting in 26 minutes.

"When Brandon plays like that, we're a totally different team," coach Bill Self said. "He definitely was into it."

Rush said in film sessions on Thursday and Friday, it was stressed to him he'd better bring his A-game on defense.

"Coach showed us how he (Sir) led the nation in three point shooting percentage last year," Rush said. "It was a real different experience for me to be able to guard a three-point shooter like that."

Self gave Rush passing grades for his work on Sir.

"He did a good job not letting him get off shots. Two to three times he didn't guard him as well as he could," Self said. "All in all he did a good job on him (Sir). I think our team defense was pretty good."

KU next will meet Oral Roberts at 7 p.m. Wednesday in Allen Fieldhouse. Coach Scott Sutton's Golden Eagles fell to Loyola Marymount, 68-65, on Friday in the season opener for both teams. Guard Ken Tutt provided most of the ORU offense with 26 points off 10-of-21 shooting. He hit three of 11 threes.

Is hard to believe that this team is missing key players when you see the scores of the first three games... We are gonna make Florida look like Northern Arizona if we keep playing that kind of Defense.... Go Hawks...

the florida game is at the orleans casino! one mile west of the strip. just wait until our superstars get to the bright lights. florida by 15. tickets $128 for fri & sat.

Just listen to our players. They are very unselfish in terms of individual stats. It sounds like they look to their teamates first before scoring. This team will have lots of success througout the season this way! Rock Chalk.

wrong speedy. tell me with a straight face that B-rush cares about the strip. that kid is a gym rat in every sense. florida may win because they have been together doing their thing, but i'm thinking it's gonna be a KU sneak attack. hawks by 11.

In the Jordan Classic I saw Collins cross-over two times in a row so fast that the defender still hadn't reacted to the first one. Sherron then whipped a one handed ball to a teammate for an easy two. After seeing that I knew he was going to be special.

yeaaah Sherron has sick handles..but who saw my dude J Dub cross em up? haha...I was dying after that. Anyone who gets shook by a 6'9 dude...should just sit down. Julian is the man.

I vote that Sherron Collins new nickname be "Hiro" as in the character on the NBC show "Heroes".

If you saw "The Crossover" the reason is obvious.

Don't you think it's little eary to say that TrueBlue???

Lets see how he does in Prime time game!

I think the unselfishness also helps keep a team together and could minimize early NBA departures. How scary could this team be if nobody left.

He's got the jab step, the crossover, he's fluid in open court, his vision is excellent. Yea, he hasn't played against Big XII caliber opponents yet but his footwork and ball handling is unreal.

I'll give it to him. You can hold out for now, no problem. There will be plenty of chances for him to impress you!

Julian Wright (aka- the Noodle) is the most ridiculously entertaining forward playing the game right now. I just sit there, transfixed, whenever he's floppin around with the ball. That kid is good and fun to watch.

However, one could probably say the same thing(s) about everyone on this team. What a group of players!

I think Self has done a magnificent job of compiling one helluva team.

I'm going to be at the Towson game and can't wait to see this team. It is fantastic how well they seem to get along and how much they seem to like each other.

My one concern is that they may be a little TOO unselfish. I worry that Rush has not shown an indication in the past to take over in the clutch of a close game. He needs to be the go-to guy, to lead the team when it counts the most.