Columbia, Mo. — Last season, Kalen Grimes was a big body who had trouble scoring and rebounding. So far this season, he's giving Missouri a big game to match.

Grimes posted his second straight double-double off a strong first half, and Matt Lawrence scored all but two of his 13 points in the second half, helping the Tigers rally for a 66-45 victory over Stetson in the John Thompson Foundation Classic on Sunday.

Grimes, who averaged 2.6 points and 2.6 rebounds last season, was named the tournament MVP.

The 6-foot-9 junior is most proud of clearing the glass for the undersized, running Tigers, after entering the season with no double-doubles.

"New team, new identity," Grimes said. "It's just something I've got my mind-set on.

"I'm going out every game and getting some rebounds," Grimes said. "That's my main focus."

Grimes had 14 points, 11 rebounds and three blocked shots for Missouri (3-0), which also beat North Carolina A&T and Army in the three-day, round-robin event. The school is 3-0 for the first time since 2003-04, although there were struggles in each of the last two games.

The Tigers trailed for the first time this season, surrendering the first four points, falling behind by four later in the first half and trailing 27-25 at the break. 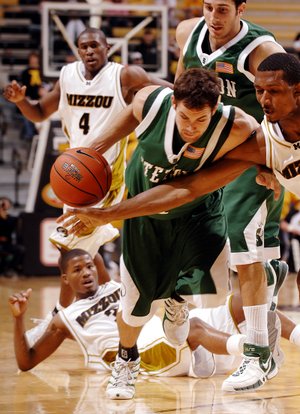 Ames, Iowa - Mike Taylor scored 14 points to lead Iowa State to its third victory in three days. Rahshon Clark added nine points and 12 rebounds for Iowa State (3-0), which led the entire second half but came close to handing new coach Greg McDermott his first loss. Eastern Illinois trailed by one with 19.7 seconds left, but Bobby Catchings airballed a 15-foot jumper, and ISU rebounded. After Clark made one of his two free-throw attempts with 4.2 seconds left, Mike Robinson's heave as time expired bounced off the shot clock.