Kansas City, Mo. — When Marija Zinic caught the ball in the post on Sunday, making a move toward the basket might have seemed difficult. After all, the Kansas University sophomore forward turned around and saw the wingspan of Iowa's Megan Skouby, who stood 6-foot-6.

"I just tried to face the rim a little bit more," Zinic said. "But she was behind me the whole time."

Zinic still found a way to score against Skouby, mostly from left-handed jump hooks and pump fakes in the lane. One problem: Zinic's 16 points were the only signs of offense Kansas displayed all afternoon. Kansas fell to Iowa, 63-49, in Sunday's finals of the WBCA Classic in Kansas City, Mo.

"A lot of the guards, we consider ourselves offensive threats and shooters," freshman guard Kelly Kohn said. "It's frustrating when you go into practice, standing on that arc, and you're knocking them down, but then you get into the game, and sometimes your feet get off or you don't have the momentum that you should have."

The Jayhawks shot 1-of-13 from the three-point line. They shot only 32 percent from the field.

Despite its perimeter struggles, Kansas (1-1) learned it had a legitimate threat in the post in the 6-2 Zinic. 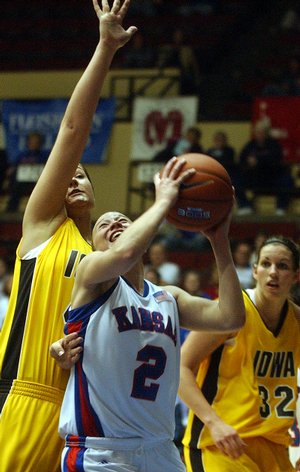 "I think we all gained some trust in Marija to throw it inside," Kansas coach Bonnie Henrickson said.

"I told her the other day that I've always had a good post player inside we could just throw it to," Henrickson said. "But I'm not going to be yelling at the guards to throw it to you until you're more consistent. I might be yelling in practice to throw it to her a little bit more because she's taking better shots and working to get deep."

Kansas trailed by 14 points at the half but went on a resounding 10-0 run to start the second half. Zinic led the comeback with six points during this span. But Skouby, the tournament MVP, quickly put a stop to the KU comeback. The Mentor, Ohio, native received the ball in the post and quickly drained a jump shot despite getting fouled. Skouby intensely pumped her fist and pushed the Iowa lead back to seven. She finished with 17 points and eight rebounds.

"We've fouled too much in these two games this weekend," Henrickson said. "We've got to be able to defend with our feet a little bit more so we're not sending people to the free throw line all night."

Looking forward, Kansas will undoubtedly have to improve its shooting. The team shot 36 percent from the field in the victory against Seton Hall, and only 32 percent against Iowa.

"I'm glad if it happens, it's going to happen early," Kohn said. "We're going to get in the gym and keep shooting. That's all we can do right now."

and to think Marija Zinic only came to Kansas because of Ivana Catic ... meaning that she was a "bonus" player kind of like Michael Lee was with Aaron Miles!