Kansas City, Mo. — Even though Danielle McCray comes off the bench for the Kansas University women's basketball team, her coach still has the same - if not greater - expectations for the freshman as if she started.

"There's no reason she can't be the best rebounding guard in the league," KU coach Bonnie Henrickson said.

McCray had nine boards and eight points Saturday in KU's 64-50, season-opening victory over Seton Hall in the WBCA Classic at Municipal Auditorium.

Kansas will face Iowa in the championship game at 4:30 p.m. today.

The Jayhawks looked rusty on offense for the majority of the game. McCray and fellow freshman Kelly Kohn attempted the most shots for Kansas, and they went 3-for-16 and 2-for-12, respectively.

"Offensively, we are a work in progress," Henrickson said. "Right now, I know these young kids feel like their feet are frozen because they're thinking so much."

Kansas relied on its hustle (15 offensive rebounds) and defense.

"Being a great defensive player is the main thing I want right now," McCray said. "That's what my position coaches have been working on with me - being able to deny, being able to guard a quick guard off the dribble."

There were nine lead changes Saturday. 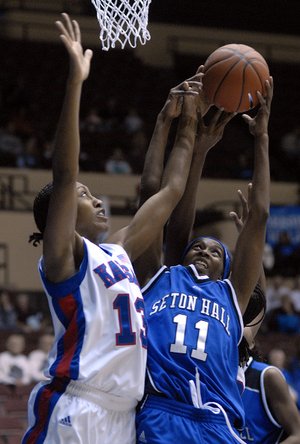 McCray was responsible for four crucial points during a 6-0 KU run that opened its lead to eight with 6:59 left.

Henrickson made an effective halftime adjustment to involve sophomore forward Marija Zinic more in the offense.

Zinic sealed her defender in the post numerous times in the first half, but didn't receive the ball. Her teammates found the 6-foot-2 Zinic more often in the second half.

"I think we pressured the ball well," Zinic said of the team's second-half performance. "We got some steals and had opportunities to run in transition, where our guards penetrated with a purpose. That allowed us to have some good looks."

Kansas had seven steals in the second half, compared to only three in the first. Henrickson said the same plays the team ran three or four times in the first half started working in the second once players found Zinic in the paint.

"We joked with her in the locker room, saying we got her a foot from the rim, and we thought she might be able to make it," Henrickson said.

Zinic finished with 15 points and was the only Jayhawk to score in double digits.

"You could be cheering, but 10 seconds later saying, 'What on earth?' when you watch us play," Henrickson said. "Right now, we don't have that consistency."