Manhattan — Kansas State coach Bob Huggins awoke Saturday morning in such a good mood that he traded in his traditional black garb for a dapper purple suit.

Kansas State defeated William & Mary, 70-60, in the season-opener for both teams, but a sloppy performance in what was to be Huggins' triumphant return to the sidelines reduced him to a whisper afterward.

Lance Harris scored 22 points, and junior swingman David Hoskins added 15 points for the Wildcats, who struggled to put away a team from the Colonial Athletic Association that won only eight games a year ago.

"He was pretty angry. He was pretty upset," freshman center Jason Bennett said. "He thought we should have beaten them by a whole lot more."

Kansas State missed 15 of its first 18 shots and fell behind, 18-7, midway through the first half, forcing the typically animated Huggins to sit grim-faced on the scorer's table and throw his hands up in frustration.

But after Harris converted a turnover into a reverse dunk, sparking a 20-2 run that put Kansas State up for good, the 53-year-old coach leaped from the scorer's table and reverted to his pugnacious self. 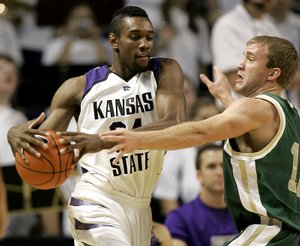 "We know exactly what he wants from us," Harris said. "He's been here since April and he's told us what he expects, how he wants us to play."

One minute Huggins was quarreling with officials, the next he was getting on freshman forward Luis Colon for not playing defense. A moment after imploring guard Clent Stewart to pass to an open man, Huggins was telling the 7-foot-3 Bennett to work in the post.

"There's high expectations," Harris said, "but we haven't shown what we're capable of yet."

Blake Young added 11 points and Akeem Wright 10 for the Wildcats, who shot a sloppy 29 percent from the field and showed little resemblance to the crisp, up-tempo teams Huggins cultivated during 16 sometimes stormy seasons at Cincinnati.

Freshman David Schneider had 18 points and Laimis Kisielius 16 for William & Mary, which should be getting used to being the punching bag for big-name coaches getting a second chance in the Big 12. The Tribe was routed in 2001 by Bob Knight's first Texas Tech team.

"We knew from Cincinnati's old stuff that coach Huggins likes to pressure a lot," Schneider said. "Our main goal was to handle the pressure."

The overmatched Tribe did so most of the game, appearing to out-hustle and outwork its Big 12 foe at both ends of the floor - much to the chagrin of Huggins.

"I'm a firm believer you should play the way you practice," he said, shaking his head.

I read somewhere that 'Purple' was about to become the new color of Kansas and people in Lawrence should be feeling pretty uncomfortable.

With their showing in Manhattan, I'm not so sure about that. The 'Cats have a lot of work to do before they even come close to the 'Hawks.

Let's not let another one slip away from us at Allen this year... Rock Chalk!