Second go-round not as easy for MU 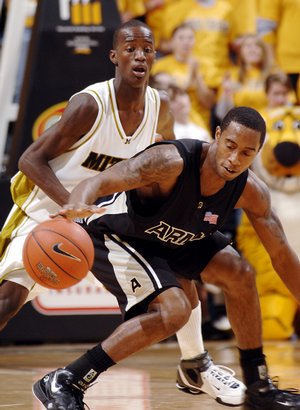 Columbia, Mo. — Missouri ran North Carolina A&T out of the gym in its opener. In the Tigers' second game under new coach Mike Anderson, the go-go was gone, and they survived at last season's stodgy pace.

Kalen Grimes had career highs of 18 points and 11 rebounds, helping the Tigers recover after blowing a 20-point lead to beat Army, 67-58, on Saturday in the John Thompson Foundation Classic. Missouri is coming off a 12-16 season and adjusting to a new style of play but got forced into the old style by Army's half-court game.

"I thought we had some learning curves because adversity took place," Anderson said. "It's like an adventure. I'm glad to see these guys stay together."

Missouri scored 101 points on Friday, getting 59 by halftime. The total for the second game was one point above last season's average.

Jackson returned to Tech's lineup for the Red Raiders' season opener and played all 40 minutes after being dismissed for academic reasons last week.