When Scott Novosel, a former Kansas University basketball player, moved to Tokyo seven years ago, he didn't know much, if any, Japanese.

"The only words I knew were 'domo arigato' from the song 'Domo Arigato Mr. Roboto,'" Novosel said about the 1983 Styx hit.

It's fitting the 33-year-old Novosel alluded to music. That's where he found his passion in Tokyo - being the front man of Jai Live, a band that fuses the rock 'n' roll and rap genres.

Jai Live formed in February with some of the same members from Novosel's former band, Niceguy Jin. The old band sold more than 40,000 records. Novosel is hoping Jai Live will be an even bigger attraction. The band's first album is due out in the spring. Jai Live's "Out of Sight" is already a candiate for Youtube's Best Underground Music Video. You can visit jailive.com for details on how to vote. Public voting will last until Nov. 16.

"If we win, we'd get a free trip to New York City and be on Good Morning America," Novosel said. "It'd be perfect timing to come home for those KU (basketball) games."

Competition is fierce, though. Jai Live's video is one of 2,264 entered in the contest.

Jai Live represents only a fraction of what Novosel has accomplished in his dream-filled career. At the same time the band formed, John Youngman of Fighting Entertainment approached Novosel about a TV show. Novosel also co-hosts Jai Live TV, which discusses Japanese culture and lifestyle. The show is mainly done in English, but includes some Japanese. 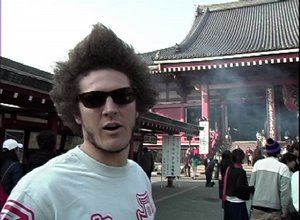 Former Kansas University basketball player Scott Novosel moved to Tokyo seven years ago and recently started Jai Live, a band that fuses rock 'n' roll and rap. He has worked on his independent film, "Fieldhouse," which centers around KU basketball, since 1998.

"We translate for the American audience with no problem," Novosel said. "Right now we're working on getting distribution, but we would like to make it strictly an internet TV show. You can check out www.the-ah.com."

Before the band and TV show started, Novosel worked on an independent film entitled "Fieldhouse." The movie, which Novosel has worked on since 1998, centers around the opportunity to play basketball at Kansas. It will be entirely shot in Lawrence, with the exception of five scenes, which Novosel will shoot in Tokyo. Completion of the film is to be expected by 2008.

Aspirations for creating the film started in Lawrence, where Novosel made the 1994-95 KU men's basketball team as a walk-on.

"I am so grateful to coach (Roy) Williams," Novosel said. "He gave me the opportunity of a lifetime that continues to help me to this day."

Novosel, a 6-foot-1 point guard, played in only 15 games for Kansas, totaling four points, three rebounds and three assists. But it's what he took from the experience that inspired him further.

"Hopefully, with the exposure and success of Jai Live TV, it will open up the necessary channels to complete Fieldhouse," Novosel said.

Novosel said speaking on the phone from Tokyo would be too expensive, so he elected to conduct the interview online. But you don't have to talk to him on the phone or recklessly plow through Kansas basketball media guides to grasp Novosel's integrity.

More about Novosel and his band

"The number one quote that I live by is from my mom and dad," Novosel said. "What you can conceive and believe you can achieve."

One individual who was available via phone was John Novosel, Jr., Scott's 37-year-old brother. John Jr. has lived in Lawrence for six years. He said iChat made it possible to keep in touch with his brother every week.

"When you tried out for the Kansas basketball team, you most likely weren't going to make it," John Jr. said. "Scott taught me that if you have a dream to do something, at least make the effort, because you're not going to be any worse off than you are right now."

Scott Novosel said he planned on visiting his family in Lawrence for Thanksgiving. John Jr. will be at the front doorstep waiting for his younger brother.

"In Tokyo, he might fail," John Jr. said. "But the whole point is too many people think they're stuck at what they're doing. That's what holds people back."

For now, John Jr. realizes Tokyo is the best place for Scott, especially when he tells him how much he's enjoying himself.

"I should say incredible instead of wonderful, because this place is so amazing," Scott Novosel said of Tokyo. "Every day, I am amazed."

I liked the blond tight fro better than this long mohawk type one. ; )

He looks like he is turning into an anime character... :)

If you watch the videos on youtube, I think the guy with the long brown mo-fro is the drummer. When they are going around talking to people, the brown haired guy is doing alot of the talking, but the guy with the tight blonde fro is still around. I think that either the LJW is wrong in posting that picture or the first guy who posted a comment is confusing the two members of Jai Live. To be honest, I don't know which one is Scott and which one isn't.