Manhattan — Bob Huggins knows what some people say about him, and yeah, it bothers him.

The low graduation rates. The players who ran afoul of the law. The DUI. The perception he and his Cincinnati program skirted the bounds of respectability.

He has a wife and two daughters, and he's not a heartless jerk. Of course it gets to him. But for those who think he took the Kansas State job to make one big mea culpa, well, they don't know any more about Bob Huggins than they do the stories that follow him.

"You do this for as long and you take as many bullets as I've taken - people who know me know who I am and what I do," he said. "It's probably too far down the road to worry about (other peoples') perception. It's not going to change."

Kansas State knew exactly what it was getting - good and bad - when it hired Huggins last March. People might criticize his combustible persona on the court and the way some of his players conduct themselves off it, but they still want to be part of the show.

With 14 straight NCAA appearances and a Final Four in Huggins' 16 years at Cincinnati, expectations around Kansas State have soared. He hasn't even coached a real game yet, and the Wildcats already have sold out their season tickets and lured one of the best recruiting classes in the country.

All eyes are on Manhattan, and not the one in New York.

"We're on a different level now, no doubt about it," said David Flores, the assistant athletic director in charge of compliance. "Coach Huggins and the staff understand that scrutiny that they're going to get. Coach is OK with it, and we are, too, because we will continue to recruit prospects the right way."

Huggins sat out last year after being run out at Cincinnati, the program he'd built into a powerhouse and the place his family considered home. But he's adapted well to Kansas State, even giving up his trademark black for purple. 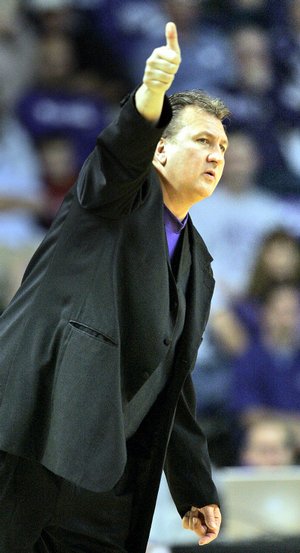 Once a juggernaut with four Final Four appearances from 1948 to 1964, the Wildcats have been mediocre, at best, in recent years. They haven't even been to the NCAA tournament since 1996, and the campus on the top of the hill is practically invisible in the shadow of that other state school 90 minutes away down Interstate 70.

"I was a little excited about the whole situation, getting a coach in here that's had a great history of winning," said Cartier Martin, the Wildcats' top returning scorer. "He's pushing us, and I think that's what each one of us guys needs to improve."

His new administration loves him, too. Season tickets are sold out for the first time since 1982-83, including 25 people who paid $4,400 for the privilege of sitting courtside. Big-ticket suites will be added to Bramlage Coliseum next year, bringing in even more revenue.

After five years of chasing a schoolwide apparel deal with Nike, the school finally has it thanks to Huggins, a longtime Nike guy. And after years of being ignored, people across the country are talking about the Wildcats again.

"I knew that there would be interest, I knew our fans would be excited," athletic director Tim Weiser said. "But what I didn't realize was just how deep that quiet desperation within our fan base was.

"It wasn't until last season when I started getting a sense of that. I watched our fans convince themselves that close losses were OK. That really scared me."

Bill Walker, one of the top high school players last year, will join the basketball team when he becomes eligible next month. Michael Beasley, a 6-foot-10 forward who is considered the top prep prospect, signed Wednesday as part of what some called the No. 1 recruiting class in the country.

And the Wildcats are still in the running for O.J. Mayo, who teamed with Walker to win consecutive Division III state championships at North College Hill High School in Cincinnati.

"I think he's in a perfect spot. I think the people out there are going to be very, very happy with him, too," said Jim Dennison, the athletic director and football coach at Walsh University in Ohio and a friend of Huggins' from their days together at Akron.

"He's a good person," Dennison added. "He believes in the academic process. A lot of people think that's not true, but nothing could be further from the truth. He likes to see his kids succeed, on the court and in the classroom."

Asked if the year away taught him anything, Huggins smiles.

"All I can do is the best I can, and I try to do that all the time," he added. "I'm like a lot of people, I've fallen short. On numerous occasions. But you try to do the best you can."

Why doesn't the LJ World just link to the DUI video.

Speaking of high integrity programs on probation, I love how when Sasha went down, Self went back to the Giles despite his tendency to hit women. Well, at least he kicked him off the team for good this time.

Unless someone else goes down?