COLUMBUS, OHIO — As he squirms in his seat, uncrosses and crosses those long legs and plays with the cast shackling his right wrist, Greg Oden looks like a kid who's been cooped up for far too long.

Which, say those who know him best, sounds about right.

The Ohio State freshman is the biggest thing to hit college basketball in decades. Only the fourth two-time national high school player of the year, the 7-footer has dazzling, game-changing skills at both ends of the court. He's already so good, USA Basketball invited him to hang with LeBron James, Dwyane Wade and other NBA stars at its training camp this summer.

But the 18-year-old might not be as eager to join the NBA as everyone thinks, especially with a wrist injury forcing him to miss the first half of the season.

"He wants to experience the college environment, and he still hasn't got to experience that yet," said Mike Conley Jr., one of No. 7 Ohio State's five heralded newcomers and a friend and teammate of Oden's since grade school.

"He still thinks he needs to get better," Conley added.

First, Oden must get healthy.

His right wrist has been immobilized since June 16, when a screw was inserted to repair a torn ligament. The injury kept him off the U.S. team for the world championships and, though the pin was removed several weeks ago, still limits what he can do in practice. 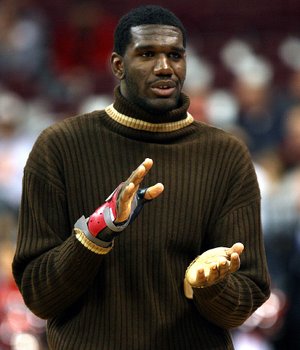 Ohio State's Greg Oden watches from the bench during an exhibition game Wednesday in Columbus, Ohio.

Off the court, too. Ohio State coach Thad Matta doesn't allow newcomers to speak to media until they've played a game, so Oden was unavailable for comment.

But a warning to everyone on Ohio State's schedule: The cast on his right wrist - Buckeye scarlet and grey, naturally - could make Oden even better. A weight-room regular, Oden has added about 15 pounds of muscle since arriving in Columbus and now weighs 280 pounds.

He's also been working on his left hand. Tirelessly.

"We had a coach in there the other day who said, 'I didn't know Greg Oden was left-handed," Matta said. "I know Greg's tired of being injured. But he's had to do some things that he maybe needed to get better at. I thought his left hand was pretty good when his right hand was not injured. But I think it could add more to his game.

"I hope there's a silver lining in this, because it's been tough."

Oden is expected back in time for Ohio State's Big Ten opener Jan. 2 but not for games at North Carolina and defending national champion Florida. After six months off, no one knows how rusty he'll be when he returns. Or how long it will take him to adjust to the college game.

That hasn't stopped people from anointing him as one of the best in the country.

"From what he's shown in practice, I'm sure he'll have no trouble adjusting," said Matt Terwilliger, who will play some center until Oden returns. "Everything within 7 feet of the basket is an easy dunk for him, with how he gets up for rebounds and things.

"He's so much more advanced (mentally) than most freshmen," Terwilliger added. "Just the way he goes through drills, thinking about positioning and how quickly he picks things up. The mental aspect won't be a factor with him."

Basketball phenoms are nothing new in Indiana, home of Oscar Robertson, Kent Benson and Damon Bailey. But even there, Oden was something special.

A starter all four years at Lawrence North in Indianapolis, Oden scored 1,873 points and had 1,058 rebounds and 341 blocks. He led Lawrence North to three straight Class 4A titles and a 103-7 record, and he never lost a home game.