Cyclone coach steps down after 12 years

McCarney, the Big 12's longest tenured coach, will remain with the Cyclones for their final two games of the season.

"Sometimes, you just know its time," said McCarney, who was under contract through 2010. "As hard as it is to say that - especially because I know that this department is on the cusp of some special things - I realize it is time for different leadership."

Speculation surrounding McCarney's future had been heating up over the past month. The Cyclones (3-7, 0-6 Big 12) have dropped seven straight to Division I-A opponents - by an average of 20 points - and are one of two teams from BCS conferences to start 0-6 in league play.

The Cyclones play Saturday at Colorado and finish the season Nov. 18 at home against Missouri. 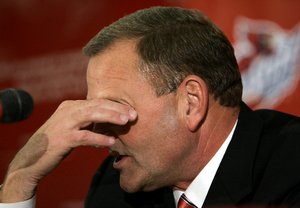 Iowa State football coach Dan McCarney wipes tears from his eyes as he announces his decision to step down at the end of the season. McCarney announced the decision Wednesday in Ames, Iowa.

"It is with sadness that I accept Dan's decision," said athletic director Jamie Pollard. "I had hoped to see coach McCarney lead the Cyclones successfully for many more years. But, it's the true measure of this man that he was unselfish in assessing what was best for Iowa State."

Iowa State came within one win of reaching its first Big 12 title game in each of the last two seasons, only to lose the season finale.

McCarney took over at Iowa State in 1995 after five seasons as the defensive coordinator and defensive line coach under Barry Alvarez at Wisconsin. He spent the first 13 years of his coaching career as an assistant at Iowa.

So what are the chances we can add McCarney to our staff?