Humm said he's shocked the record has stood for 32 years, even though the Huskers employed a ground-hugging offense from 1980 to 2003 under Tom Osborne and Frank Solich.

"When they bring in a kid here who plays three or four years, it's going to be a different story," Taylor said. "You'll see lot bigger records. I'm glad I got first shot at it. I'll get mine out of the way, and someone else can break it."

Humm, 54, said he'd admired Taylor from afar. Humm lives in his hometown of Las Vegas and works for the Oakland Raiders, one of the three teams he played for in the NFL. He's co-host of the pregame show on the Raiders' radio network and sells advertising and luxury suites at McAfee Stadium.

Humm said he's impressed with the way Taylor bounces back from the punishment doled out by opposing defenses.

"I love the kid," Humm said. "You look at his manner and his demeanor. He's just an incredibly tough kid, the way he stands in the pocket and takes the shots he does. I have a ton of respect for him." 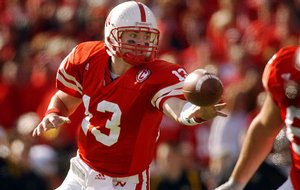 Taylor said he spoke with Humm for 20 to 30 minutes by telephone Monday, each trading stories about their experiences at Nebraska. Taylor said Humm mentioned his 19-year struggle with multiple sclerosis, which has forced him to do his sales and radio work from his home.

As a player, Taylor is like Humm in that precision rather than arm strength is his forte. And like Humm, Taylor is known as a character guy. Both are communications majors, and Humm said he offered to help Taylor in any way he could in the future.

"He just told me to pursue whatever I wanted to do," Taylor said. "He told me to keep playing as long as I can. We didn't even talk about all football. He was just a great guy to shoot the breeze with."

Humm was one of Bob Devaney's last big recruits before he retired as Nebraska coach. Notre Dame was among the first schools to call, and Alabama's Bear Bryant enlisted the help of Joe Namath to woo him. Humm said Devaney and then-

Taylor was lightly recruited out of high school in Norman, Okla., and bounced from Wake Forest to a junior college before landing in Lincoln.

Any feat he's accomplished, he said, has come with the help of his receivers and other teammates.

Callahan, who knows Humm from his days as a Raiders' assistant and head coach, said he's happy Taylor is about to break the record.

Taylor said he would much rather win a Big 12 championship than set records.

"Being a quarterback that led my team to a championship. That's much more important to me than any of the records I have," he said. "That's what guys like Scott Frost, Eric Crouch and Tommie Frazier are known for. They've won championships. People just remember them winning games, and that's what I want to be remembered for."