Jayhawks miss out on Anderson, who opts for Oklahoma State

Cole Aldrich has been a frequent visitor to Kansas University's campus the past three years.

"He's been to as many 'Late Nights in the Phog' as I have," KU coach Bill Self cracked Wednesday, happy to report the 6-foot-11, 250-pound Bloomington (Minn.) Jefferson High big man would be to many more as an official member of the Jayhawks.

Aldrich signed and shipped his national letter of intent to KU on Wednesday, the first day of the weeklong signing period.

Receipt of the letter eased the pain caused by forward James Anderson's decision to attend Oklahoma State instead of KU.

"Obviously, this is anticlimactic but a big get for Kansas," said Self, who has known Aldrich was KU bound since Halloween 2005, when Aldrich orally committed to KU over Minnesota and North Carolina.

"He committed a year ago, and we probably knew we had a great chance for him three years ago," Self noted. "I think it's so cool that somebody commits because they want to be at a place. They believe in a place because of the place, not just the opportunity from a personnel standpoint. He wants to be at Kansas.

"He also held true to his word and jumped on board when we asked him to. I know he's a team player and excited about this."

Self is enthused about adding an inside presence who averaged 16.5 points and 13 rebounds his junior year at Jefferson.

"He is a load," Self said. "He should be a great sealer, should be a defensive presence. He has touch and feel around the basket. He runs the floor better than just about anybody his size. I see him being a good scorer, a true 5-man with skill." 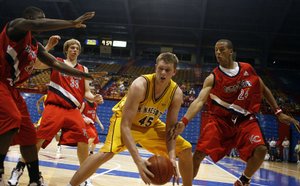 Kansas University signee COLE ALDRICH (in yellow) heads for the basket during the Jayhawk Invitational Basketball Tournament in Allen Fieldhouse. Aldrich signed his letter of intent Wednesday to join the KU men's basketball program next year.

Self said Aldrich had a "great second half of the summer" after struggling late in his junior year of high school as well as the spring and early summer AAU season.

"People didn't think he looked that good at the Jayhawk Invitational (in May), a large part due to health (foot injury)," Self said. "Also part of it is he might have lost a little bit of the hunger he needed to have to keep improving on a regular basis."

Self reminded him, "Hey, you were ranked very, very high going into your junior year and rightfully so, and your ranking has dropped some because you haven't performed as well as you can. There's only one person who can change this if it means a lot to you, and it's you.'

"I think it was a great wake-up call for him. People there have said he really has worked very hard over the summer getting his body in shape."

Aldrich, who put pen to paper in a 7:15 a.m. ceremony at the high school Wednesday, said he's anxiously awaiting his first official Late Night in the Phog in 2007.

"I know what to expect now. I have time to work on my dance moves," Aldrich said. "I can't wait to get there and play. I've seen up close how great the fans are at KU. If you go to a game there you won't go anyplace else. There's not another arena where every game you play, even if it's against some unknown school, you'll draw 16,000."

¢ Anderson's choice is OSU: Anderson, a 6-6 forward from Junction City (Ark.) High, said "it came down to Kansas and Oklahoma State. Knowing that I was their No. 1 guy from the start was a big factor (for OSU). I thought it was my best fit."

Of Anderson's decision, Self said: "It's disappointing. I think he'll be a very good player, but not surprising. I thought all along he was a heavy Oklahoma State lean. They've been recruiting him since he's been young."

¢ What's next?: Self said KU still would like to sign another wing player in the early signing period, which concludes next Wednesday. No available seniors, with the exception of Burlington guard Tyrel Reed, have listed KU prominently. Reed has said he will likely wait until the spring to sign.

"We have a couple things maybe not probable but possible we'll look into and see where that leads," Self said, not naming names of prospects. "We'd like to sign a wing. That might not work out. We've obviously missed out on a couple (Anderson and Kyle Singler)."

One remaining wing is 6-7 Darrington Hobson from Decatur Christian School in Illinois. He also has Oklahoma State, Illinois, UNLV, Texas A&M, Baylor and others on his list.

¢ Chalmers' big toe ailing: Self believes Mario Chalmers, who has a severely sprained left big toe, will be able to play in Saturday's 7 p.m. regular season opener against Northern Arizona. "He could have played maybe last night," Self said of the win over outmanned Emporia State.

Self also said contrary to rumor he has not decided to red-shirt freshman guard Brady Morningstar at this time.

I wholly agree mitch! He is definitely the perfect fit for KU.

You gotta love it when a KU fan with this much talent signs on with team. Aldrich will bring talent AND enthusiasm. Go Aldrich !! Go 'Hawks!!!

I have seen the Reed kid play a couple of times...he is not bad, but I'm not sure how much he likes KU. Do you think Self can find another Wing?

It sounds like there aren't too many more highrated players for the wing spot. Kansas is close to Reed's hometown of Burlington, KS. It sounds like he's ready to leave the state. Heck, even Roy has been to the state to watch Reed. We need to jump at this kid. He's right here in KU's hands!!

As if there aren't enough reasons to make trips from MN to KU to cheer on the Jayhawks, having a MN boy to root for is icing on the cake. Congrats Cole on living a dream! Now make sure you work your tail off to make the Jayhawk nation proud! Rock Chalk Jayhawk, GO KU!

"Knowing I was their #1 guy from the start was a big factor" -- interesting. How about knowing that a program the magnitude of Kansas thought enough of your game and potential that they wanted to offer you a scholarship??? Oh well. Vaya con Dios.

I look forward to watching you (and most others who choose un-wisely) get smoked by the Jayhawks the next 4 years. :-)

Pefect timing for Aldrich since Giles is gone and Kaun will be a senior next year...

i hope ku fans realize that and don't abuse him like they did padgett. he will take time to develop, just like sasha and darnell are taking time...

i am pessimistic - but i am not a jerk. i do not hate. i just don't think cole is the player everyone thinks he is. i'll be as happy as a... i don't know... something that's real happy, if he is half as good as the expectation.