K-State back in bowl biz

Boulder, Colo. — No bowl game since 2003. No conference road wins in two years.

Kansas State freshman quarterback Josh Freeman had these two glaring stats brought up to him all week. He was sick of hearing it.

So Freeman decided to do something about both. Freeman completed 22 of 26 passes for 251 yards and two touchdowns Saturday to lift the Wildcats to a 34-21 victory over Colorado.

"It means a lot," Freeman said. "We come out every week with the intention of putting up a game like this. This is great."

The Wildcats players don't care what bowl game they attend, only that they'll be going to one. Offensive lineman Greg Wafford couldn't have asked for a better 21st birthday gift.

"My parents usually give me money for my birthday," he said. "This is better."

"All it means is a chance to play another game," Prince said.

But the road win meant something. To come into Boulder, a place Kansas State hadn't won since 2000, and hang 34 points on a good Colorado defense impressed even him. 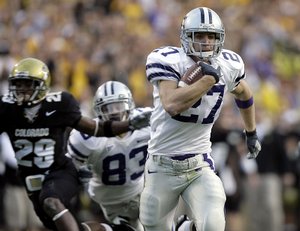 Kansas State wide receiver Jordy Nelson sprints for the end zone after catching a pass in the fourth quarter against Colorado. Buffaloes cornerback Cha'pelle Brown and KSU wide receiver Daniel Gonzalez trail on the play. The Wildcats earned a 34-21 victory Saturday in Boulder, Colo., making them bowl eligible for the first time since 2003.

"Road wins are one of the very challenging things and mysteries about sports," Prince said. "The field is exactly the same - Gene Hackman even took the guys out and walked them on the court and measured the basket in 'Hoosiers.' To play the way we did, I was hoping to get that kind of response."

The Wildcats' first road win of the season kept alive their slim chances of winning the Big 12 North. They need to win out and have both Nebraska and Missouri lose their remaining games.

In a battle of first-year Big 12 coaches - Prince and Dan Hawkins were hired just 11 days apart last December - the contest appeared headed toward the wire.

Trailing 17-0 at halftime, Colorado drew within 20-14 when quarterback Bernard Jackson went 62 yards for a touchdown early in the fourth quarter to put pressure on Kansas State. It was the longest run by a Buffaloes quarterback since Darian Hagan's 71-yard run against Colorado State on Sept. 9, 1989.

The Wildcats' Yamon Figurs added a 30-yard touchdown on a reverse late in the fourth quarter to put the game out of reach.

Colorado (1-9, 1-5 Big 12) couldn't get anything going in the first half. The Buffs had just three first downs and 2 yards rushing. They rediscovered their offense in the second half, piling up 308 yards. Jackson finished with 105 yards and two touchdowns rushing. He also had a 1-yard touchdown pass to Tyson DeVree.

"I take the blame for us starting off slow in the first half," Jackson said.

When Hawkins left Boise State for Colorado, he knew the road was going to be rough - but not this rough.

"I knew this was not going to be an easy rodeo when I got into it," he said. "I came in with my spurs on. I might be getting a little longer ride than I thought I was going to get. But I knew there was going to be some bucking going on."