College Stations, Texas — Jorvorskie Lane has been searching for father figures his entire life. This spring, he became one.

Texas A&M's bruising 6-foot, 274-pound running back doesn't keep track of his rushing yards or his touchdown total, even though it's only two away from the oldest season record in the book for the Aggies.

"I was just playing around and I was telling a few of my teammates, 'Now, watch, let's see if I can get her to say 'Da-da,"' Lane said. "A few days later, we were sitting in our apartment and she just said, 'Da-da!' I said, 'What?!' Now, she just hollers it out all the time."

Lane's sensitive side belies what the aptly nicknamed "J-Train" is like on the field: a battering-ram tailback with a lineman's strength and a dancer's feet.

"Usually, a guy that big can't run like that and have the balance that he does," said Missouri coach Gary Pinkel. "He certainly presents a problem."

But no record will ever erase the resentment Lane still feels for his father, Joel Davis, a former Oklahoma basketball player. Lane's mother, Pinky Lane, had Jorvorskie when they were sophomores in high school. 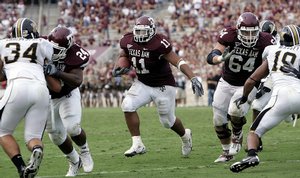 Texas A&M's Jorvorskie Lane (11) runs up the middle during the third quarter of the Aggies' game against Missouri in this file photo.

He was raised by his maternal grandparents in Lufkin, where he was also nurtured by uncles and the parents of his friends. But he always missed having a father.

"I'd ask someone how to change the oil in a car, and they'd show me, and I'd ask them where they learned it from and they'd say, 'My dad,"' Lane said. "I ask myself this all the time: What kind of a person would I be if I had a father growing up?

"It's just a hole in my heart. I think about it all the time."

Basketball was his first love growing up, but by the fourth grade, he was one of the biggest kids in his school, making football a logical detour.

Lane weighed 230 pounds by the time he was a freshman at Lufkin, one of the state's football powers. Coach John Outlaw realized quickly that Lane was no ordinary athlete.

Lane was 265 pounds by his senior year. Along the way, he played some quarterback and even punted.

But Lane loved to play running back, and Texas A&M coach Dennis Franchione won him over by promising one of Lane's uncles that the youngster could play tailback.

Lane has his eye on playing in the pros, but sees an NFL salary more as a way of supporting those close to him more than a personal quest.

The real goal in life is being a better father to Javia than the one he had.

"It's a big motivation," Lane said. "One day, she's going to want everything. I want to get my degree and go to the NFL. That's going to bring money in. I just want to do everything for her."