Wright in no rush to leave KU

Sophomore expects to spend some time on wing this season

On the basketball court, Julian Wright is a man who always seems to be in a hurry. He rushes to hit the open man. He puts up a shot and streaks to the other side of the lane to put it back up again when it misses. He bolts to get into position to block a shot and is off to the races on a fastbreak or to get back on defense.

As for the college experience as a whole, Wright doesn't seem to be in any great hurry for that to end.

"Yes, I'm still working toward that goal," Wright said when asked if he wants to graduate in three years and then bolt for the NBA.

Surely, a top-five forecast in the NBA Draft, should one come, would change your mind, right, Wright?

"No, not really," he said. "I know a lot of players (on a four-year path to a degree) finish their junior years and are ready to go, but once you leave, it's much harder to get your degree, once you're making money. I'd be so close, and I feel like college is not too bad. It's not a bad place to play ball. I'm not in a rush at all."

Beyond getting his degree, Wright's motivation for staying three years is that he wants to be sure he's ready when he makes the move.

He projects as a small forward in the NBA. He knows that.

And he knows he needs to develop before he's polished at that position. 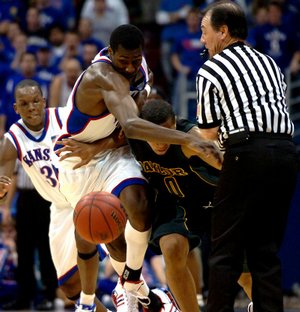 It's natural, from the chair of spectator, to think first about the ways he can become a more buttoned-up player with the ball in his hands. He needs to handle the ball more carefully, trim his turnover total and improve his outside shot to be ready for the small forward position.

Wright said with the addition of freshman Darrell Arthur to the roster, he expects to split time between the wing and the post.

Wright answered quickly when asked what would be the most difficult aspect of making the transition to playing on the perimeter.

"Defensively," Wright said. "That's the hardest thing, especially with coach (Bill) Self. He just preaches defense all the time. I want to help the team in as many ways as possible, so the only way I can stay on the floor is playing defense. It's a new year, even more for me. I have to know a lot more playing both positions, inside and outside. That's going to take a lot of concentration on my part."

The most difficult aspect of defending the perimeter?

"Screens," Wright said. "There are some big guys out there setting screens. Guards as well make it harder. They're quicker. They can get their shots off quick. I have to have quick feet and react much faster than I have in the past."

If Wright's feet are in the right place and there isn't a big body keeping him from guarding his man, Wright will make it difficult for shooters to get clean looks.

"I'd like to think my length is an advantage," Wright said. "I have to learn how to use it on defense as well as offense."

Wright, a 6-foot-8 forward from the Chicago area, honed his perimeter skills by attending basketball camps.

"That gave me the confidence to know I could hang with the best players in the nation at the perimeter position," Wright said. "That gave me a lot of confidence here. Just trying to get better working against guys like Brandon Rush and Mario Chalmers every day in practice will only make me get better."

Wright said Rush is the most difficult player on the team for him to defend in practice.

"He's agile," Wright said. "He can shoot it from deep. And it makes it even harder when big Sasha (Kaun) comes and sets a screen. He's getting better at attacking the rim and making decisions, kicking it out or finishing. So he's really the hardest player for every player on the team to guard, really. We're all trying to get better, so that's how you do it, play as hard as you can against each other in practice."

Wright said he is shooting much better from the outside, but added that doesn't mean he will be launching many long ones.

"I'm looking to have more assists," said Wright, blessed with exceptional court vision. "We have so many scorers inside and outside. I'll look more for my shot on the perimeter and I feel more comfortable to take a shot from the perimeter if I'm in a position to shoot, but we have Brandon shooting 50 percent Mario (Chalmers) shooting real good, lot of guys shoot better than me so I want to rack up the assists."

If Wright sticks to his plan to stay three years, he will be better for the extra year of education on the court and in the classroom, and the NBA will be better off because the player they get will be one year more mature.

With Chalmers, Robinson and Rush on the floor, Wright will be a big by default. With the loss of Giles (I'm resigned to that now) and Kaun's injury, I don't see that many packages Self can use with Wright on the perimeter. It also appears that Collins will play significant minutes before long, and Arthur will probably be forced to the 5 unless Kleinman can become Christian Moody with a little more size.

By mid-season, I could see a starting lineup, 1 through 5; Robinson, Chalmers, Rush, Wright and Arthur. That could be the best running team of all time. Can you imagine being the poor guys back on defense with that group storming down the court at you?

Julien has the mentality and the tools to become a bigger, stronger, Brandon Roy. Roy worked for 4 years at Washington and when he came out he has amazed NBA coaches with his breadth of skills and his maturity. Roy will be an All-Star in the NBA and sooner rather than later. Julien has that same mind-set to be the complete baskeball player. In two or three more years we will be watching Wright as the ROY in the NBA.

I don't know why but when I read the name 'Roy' on this site, it makes my teeth hurt.