The rumor mills had him slotted him on NBA Draft boards, but guard Brandon Rush formed his own contrasting notion as he sat in the Palace of Auburn Hills locker room following Kansas University's shocking NCAA Tournament first-round exit.

"Right after the Bradley game, I knew I was going to come back," Rush said. "It wasn't a close decision."

Rush was so adamant that neither he nor his family approached NBA officials to inquire where he would be selected in the draft.

His return bodes well for a loaded KU team, which welcomes back all five of its starters and adds two McDonald's All-Americans.

Perhaps the best of a talented bunch, Rush led the team in points and rebounds last year, averaging 13.5 and 5.9, respectively.

But the Big 12 freshman of the year faltered down the stretch. In his last 12 games, he surpassed 13 points only once, culminating in his 4-for-14, nine-point performance in the team's 77-73 loss to Bradley.

"My shots weren't falling," Rush said. "I was getting frustrated and didn't have enough confidence."

Rush said that late-season swoon and his team's first round loss inspired him to come back for his sophomore season. And because of his conditioning and fundamentals efforts, the 2006-07 season could end on a happier note.

During the offseason, Rush and his best friend on the team, guard Mario Chalmers, worked on the court twice a week and hit the weights every day.

"We made each other better," Rush said.

On the hardwood, Rush focused on going to his left, knocking down threes, driving to the lane and shooting pull-up jumpers off the dribble. In the weight room, he upped his bench press to 235 pounds (he only could hoist 175 before his freshman year) and his squat from 225 to 375. Rush's honed skills and added muscle should help his self-assuredness, which faded during his last 12 games. 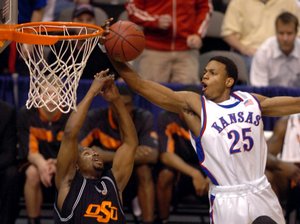 Brandon Rush was named preseason Big 12 co-player of the year along with teammate Julian Wright.

"He's a lot more confident in himself," Chalmers said. "That was one of his biggest problems last year."

"Kareem won the majority of them," Brandon Rush said. "At least I got the props of saying I beat him a couple of times."

Sooner rather than later, Rush likely will play against other NBA players on the next level.

The sophomore has the range to have hit 50 three pointers at a 47.2 percent clip last year and the athleticism to attack the rim.

"There were a couple of times where he drove to the basket, and you just think he's going to lay it up," guard Brennan Bechard said. "And he dunks it out of nowhere. And you're like, 'How did he do that?'"

"It does put a little bigger target on his back," KU coach Bill Self said, "which is not a bad thing because I think this team needs to operate under duress and under pressure."

Although Rush wants the ball in his hands with the game on the line, he said his roommate, junior Russell Robinson, served as the leader on the youthful team, which lacks any seniors.

Recent chatter has suggested this season will serve as Rush's last at Kansas despite his unexpected return for his second year.

Whether Year Two represents his swan song or not, last year's season-ending loss - to a Bradley team Rush said KU overlooked - has motivated Rush for a strong sophomore campaign.

"He has a chip on his shoulder, going out in the first round not only embarrassed the team, it embarrassed him," junior Jeremy Case said. "He's coming back with a vengeance."